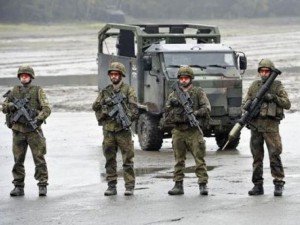 Merkel’s Cabinet on Tuesday backed the deployment, which includes sending 1,200 troops along with Tornado reconnaissance planes, refueling aircraft and a frigate in support of France in the fight against terrorism, according to the document obtained by Bloomberg News. More troops can be sent in an emergency under the proposed mandate.

The proposal requires a vote by the lower house of parliament in Berlin, probably to be held Friday. The mission is set to cost 134 million euros ($142 million) and last until the end of 2016.

“German forces will be deployed primarily in and over the operational territory of the IS terror organization in Syria as well as the territory of states where the government has given its consent, as well as the eastern Mediterranean, Persian Gulf, Red Sea and adjacent seas,” according to the draft.

“The direct participation in the fight against Islamic State represents an intensification of our security-policy engagement in the region,” according to government talking points cited in the draft.