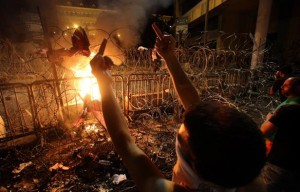 A Lebanese security agency has issued a highly unusual statement implying that ISIS had infiltrated grassroots #YouStink protests in Downtown Beirut in a bid to sow strife.

General Security announced Tuesday that it had arrested two Lebanese men—identified only by their initials Kh.Sh. and Aa.A—for being members of an ISIS cell aiming to “carry out bombings and prepare IEDs to target Lebanese army and security force centers and vehicles.”

However, in an strange turn, the statement went on to claim that the cell “assigned infiltrators to join the latest civil society demonstrations in Downtown Beirut.”

General Security added that infiltrators were tasked to “curse officials and write offensive and obscene phrases on the tomb of [former PM] Rafiq Hariri with the aim of spreading sectarian strife.”

The #YouStink activist movement emerged after garbage began to pile up on the streets of Lebanon’s capital and Mount Lebanon in mid-July, with protests quickly gaining steam while spin-off grassroots groups also began protesting government corruption and the country’s political system.

On August 22, security forces suppressed a peaceful #YouStink protest in Downtown Beirut, sparking an even larger protest the next day that degenerated into rioting that saw angry youths clash with riot police and set fires.

The political affiliation of the rioters—if there is any—remains unknown, while the Amal Movement denied allegations that it had infiltrated the August 23 protest.

The following week #YouStink organized a mass rally attended by tens of thousands of protesters in Downtown Beirut’s Martyrs Square, which ended with minor acts of vandalism at a security barrier outside the Grand Serail seat of government.

Since then, activists groups have conducted a growing a number of street actions, including the September 1 occupation of the Environment Ministry, a hunger strike outside, as well as public acts of disobedience.

A number of people remain detained for their purported involvement in acts of vandalism and rioting in the protests, leading their relatives to hold their own sit-in Monday evening to call for their release.

#YouStink has called for another protest on Wednesday in Downtown Beirut aimed at preventing Lebanon’s leaders from attending the second round of the national dialogue, which ended fruitlessly last week.