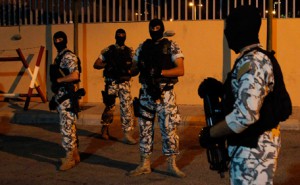 General Security – General Directorate members arrested a network of 8 Syrians who were planning to carry out suicidal attacks over the Lebanese territories, a communiqué issued by the General Security said on Thursday.

The communiqué noted that the General Security department arrested the Syrians (M.N.), (Kh.N.), (H.Kh), (A.W), (M.N.), (M.Sh), (A.N.) and (R.N) over the crime of belonging to a terrorist group and communicating with fanatic groups.

The arrest came after an intensive and precise follow up on the activities of terrorist groups and the sleeping cells affiliated by them, the communiqué said.

Upon investigations, the arrested confessed that they rented a room in order to accommodate suicidal groups and prepare bombs and explosive belts to carry out suicidal operations against tourism cafés and restaurants and UNIFIL patrols.

The detainees were referred to the concerned judicial authorities and efforts are ongoing to arrest the other culprits.