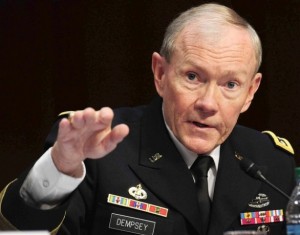 The chairman of the United States Joint Chiefs of Staff, Gen. Martin E. Dempsey has said that the Islamic State of Iraq and the Levant (ISIL) poses a transregional threat and to combat with it a “Transregional Strategy” is needed.

During his meeting with Afghan President Mohammad Ashraf Ghani, Gen. Dempsey said on Sunday afternoon there is a clear need for a transregional strategy to address ISIL.

During the meeting it was discussed that ISIL, locally known by its Arabic name Daesh, in Afghanistan are most notably the previous members of the Tehreek-i-Taliban Pakistan (TTP) who have regrouped under the name of ISIL or Daesh.

ISIL is the latest and most successful manifestation of the terror threat, they added, posing a military threat and promoting an ideology that appeals to disaffected youths around the world.

“I think we’re all having an important discussion on how to address the transregional nature of what is clearly a persistent threat that has to be addressed at a sustainable level of effort over a period of time,” Gen. Dempsey told reporters.

He said there nine stages of development for a terrorist group like ISIL, adding that they are at the beginning stages in Afghanistan and there is an opportunity to deal with it.

The terrorist group of Deash was operating in Iraq and Syria for years but it appeared in Afghanistan few months before.