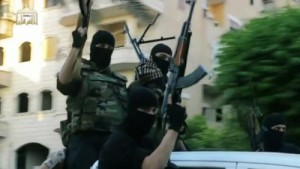 Illustrating the growing influence of Islamic State (ISIS) in Gaza and the danger that terrorists may receive training abroad and bring it back to the coastal enclave to cause instability, a Gazan was reportedly killed in Syria fighting for the brutal terror regime.

The Palestinian Araba Ma’an News Agency reported Tuesday that the man was killed by US-led coalition airstrikes in Raqqa.

Sources in Gaza told the paper that the man was Wahid Mahir al-Haw, and that he hailed from Beit Lahiya in northern Gaza.

The report comes as Salafist groups in Gaza affiliated with ISIS have been becoming more active, and just last Wednesday claimed a rocket attack against Israel.

Hamas told Israel that the ISIS-linked groups had fired the rockets to try and stir up conflict between Hamas and the Jewish state by sparking an IDF response.

Defense Minister Moshe Ya’alon (Likud) responded to the message last Thursday, saying, “even if those firing on Israeli territory are gangs of rebels from global jihad organizations interested in challenging Hamas by firing at us, we view Hamas as responsible for the goings-on in the (Gaza) Strip, and we won’t tolerate attempts to harm our citizens.”

The “Sheikh Amar Hadid Brigades” which claimed the rocket attack said it was an act of revenge for the death a Salafist leader affiliated with ISIS, who last Tuesday was shot dead by Hamas forces in Gaza City as they tried to arrest him and he allegedly opened fire on them.

After taking part in the rocket attacks against Israel last summer, ISIS has threatened to destroy Hamas and is reportedly rapidly gaining support by jihadists in Gaza who view Hamas as too “moderate” and not religious enough.