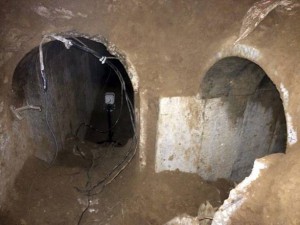 At least six Hamas militia fighters were killed and others were wounded Tuesday night when a tunnel dug under the northernmost point of the Gaza Strip close to Israeli territory collapsed, local sources said.

Hamas initially said six people were killed but then slapped a news blackout on the incident.

Rescue work resumed in the Beit Lahya area Wednesday morning after a night of bad weather that likely was the cause of the earth shifting in the tunnel.