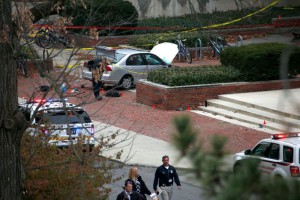 The deadly attack at Ohio State University is the first in a series, a Gaza-based jihadi claimed to Breitbart Jerusalem.

“The Muslims will now give the Americans a taste of their own medicine,” Abu Baker Almuhajer said, adding that a recently published propaganda video was a call on Islamic State sympathizers around the world to act.

Almuhajer, 37 years old, originally from Egypt, is a senior militant in Majlis Shura Almujahedeen, the council of the Mujahedeen organization. He was accused of involvement in shooting rockets at Israel and attacks on Israeli and Egyptian soldiers.

“We expect similar actions in America and the other Crusader countries,” he said. “By claiming responsibility, IS sent a message to the mujahedeen all over the world that the time to tip the balance has come, and that they should strike and retaliate against the crimes committed against our state in Syria and Iraq.”

“More ‘lone wolf’ attacks like the one at Ohio and group operations like Paris are underway,” he said. “The state leadership is working on all fronts to manifest its might. As long as the war against our state worsens, our state will labor to move it to the countries of the cross and heresy.”

“The young Muslims, even the undecided ones, will understand that it’s not only a war against the Islamic State, which they try to paint as a homicidal monster, but one against Islam itself,” he added. “The Islamic State only uses measures permitted by Islam and Allah. It doesn’t kill people for the sake of killing, but only carries out the divine edicts against those who seek to corrupt our lands and life on earth, spread moral decay and oppose Sharia law.”

“In this war the Islamic State cannot lose. Even if there are some withdrawals, millions of young Muslims around the world, who are true to their religion, will promote the victory of Islam and the imposition of Allah’s sharia. There’s no other state in the world that resisted for so long the coordinated attack of so many countries as those who make up the anti-Islamic coalition. It’s not a coalition against the Islamic State, it’s a coalition against Islam. The young Muslims, in whose hearts Islam reigns, will join, each in his own way, in this effort and show the Crusaders and the infidels that they have no chance of winning.”