You are here: Home / Mediterranean / Gaza and Israel prepare for war With each other 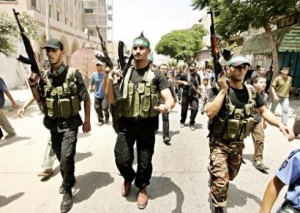 While Hamas, the governing group in Gaza, are taking care not to slide into a military escalation against Israel at this time, officials are boasting that workers are working day and night to manufacture rockets and other weapons, and to excavate new tunnels for concealing rocket launchers and mortars, as well as new tunnels for strategic attacks within Israel itself, according to Breitbart.

Al-Qassam Brigades, the military wing of Hamas, are recruiting as many teens as possible so they could acquire military skills, train with live ammunition, and practice civil defense and first aid.

According to a Hamas spokesman:

The history of Hamas and its fighting brigades sets before us a glorious and honorable picture of preparing and producing weapons and excavating through rock to resist the occupier and cause it pain. Today, after many years, this picture has produced the Al-Qassam Army, as you and the world see, with its fighting units that participate today in this impressive display: artillery units, marine units, the elite unit, the tunnel unit, the sniper unit, the armored unit, the infantry unit, and the aerial defense unit. These are not [mere] names and nicknames – they are fighting units that subdued the enemy on Gaza’s doorstep, broke its arrogant pretense, and humiliated their opponents on the land, in the sea, and in the air, with the grace of Allah the Almighty.

Iran and Qatar give Hamas money and weapons to fight Israel

Three years ago, the massive slaughter of Palestinians and innocent Sunni protesters by Syria’s president Bashar al-Assad caused a split between Syria and Hamas, which moved its headquarters from Damascus to Doha, Qatar, and a resulting split between Hamas and Iran.

However, Hamas and Iran are putting aside their differences, and now Iran is once again sending the Al-Qassam Brigades, the military wing of Hamas, tens of millions of dollars to fund rebuilding its network of tunnels and the manufacturing of new rockets and other weapons. The amount of aid is not as great as provided by Qatar, but is significant.

Israel and Qatar do not officially have diplomatic relations, but Israel is cooperating with Qatar’s plan to rebuild 1,000 homes that were destroyed in last summer’s Gaza war, as part of a $1 billion aid pledge.

An unnamed official in the Palestinian Authority (PA), which is the governing group in the West Bank and is the nominal head of the “unified” Palestinian government, says that the agreement between Qatar and Israel threatens to marginalize PA:

The PA fears the political implications hidden in the trenches of the Qatari initiatives and Qatar’s direct communication with Israel, particularly in terms of the proposed long-term bilateral truce between Hamas and Israel and the establishment of an airport and a seaport in Gaza.

Qatari involvement regarding a bilateral truce between Hamas and Israel means stepping around the PA’s role, leadership and position and ignoring Egypt’s sponsorship of the Palestinian issue with Israel. [It would result in] the separation of Gaza from the West Bank, the establishment of a separate entity in Gaza with Qatari funding, the marginalization of the powers of the PA and government in the Gaza Strip and the preservation of Hamas’ control on the ground and over the crossings.

This illustrates one of the many reasons why there can never be a successful Palestinian state: Hamas and the Palestinian Authority simply do not get along.

Israel prepares for war with Hamas in Gaza

Israel is, of course, aware of Hamas’s activities in Gaza to build tunnels and manufacture rockets and other weapons, and is applying lessons learned from last summer’s Gaza war.

Israel is tripling the size of the “Samur” unit, which is designed to fight tunnel warfare. It has been receiving training in destroying weapons hideouts and tunnels.

According to Israeli army General Sami Turgeman, the IDF made mistakes during last summer’s Gaza war by not evacuating Israelis living in homes near the Gaza border:

I think most of us went into this mistakenly thinking that evacuating residents of the border towns would have been a victory for Hamas.

He said that Israel’s military could have been more effective if civilians in border towns had been evacuated, as the army could then have concentrated on the enemy without having to worry about protecting civilians. Jerusalem Post and Israel National News