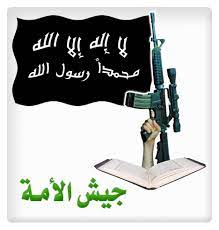 On May 16, 2021, the Al-Qaeda-affiliated Gaza-based jihadi group Jaysh Al-Ummah Fi Bayt Al-Maqdis (“The Ummah Army In Jerusalem”) released two statements claiming responsibility for a rocket attack on an Israeli settlement and celebrating the car-ramming attack in Jerusalem, urging Palestinians to wage jihad against Israel, and “revive the glory of martyrdom operations”, like reported by memri.org.

The call for suicide attacks against Israel followed the May 10, 2021 rocket attacks against three Israeli positions when the group’s leader Abu Hafs Al-Maqdisi recommended “martyrdom operations” as a “power tool” to target Israel.

According to a brief statement released by Jaysh Al-Ummah’s media arm Al-Rayah Foundation For Media Production, the group said: “The mujahideen of Jaysh Al-Ummah in Bayt Al-Maqdis [Jerusalem] targeted Sha’ar HaNegev mustakhrabat [an Arabic derogatory term for an occupied area] with a 107mm rocket salvo at 1 pm in response to the Jews’ violation of the Muslim blood and desecration of their sanctuaries.”

In a subsequent statement, the group expressed its blessing for the car-ramming attack near Dahariyya Junction in the southern West Bank and described it as a “heroic operation carried out by the one of the heroic sons of Al-Quds [Jerusalem].”

Calling for more attacks in the West Bank and inside Israel, the group said: “In that regard, we urge our brothers in the [West] Bank, Al-Quds [Jerusalem] and the occupied [inside] territory to make more sacrifices and wage jihad to revive the glory of the martyrdom [suicide] operations, which disturb the sleep of the Jews.”