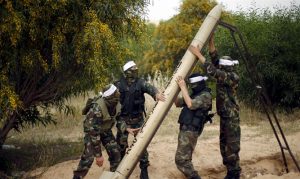 Four terrorists from the Islamic Jihad organization were killed in a so-called “work accident” in the Gaza Strip late on Monday.

After explosions were reported in an Islamic Jihad compound in the northern Gaza City neighborhood of Shejaiya, Palestinian Arab media initially attributed the explosions to Israeli Air Force strikes.

However, Israeli security officials quoted by Israeli media denied any Israeli connection to the incident, adding that it appeared to have been a “work accident.”

The group subsequently announced that four of its members were killed in the blast during “preparations to remove the criminal entity from our occupied land.”

According to Kan 11 News, which cited Palestinian Arab sources, the terrorists were killed while preparing rockets to fire toward Israel.

The incident comes amid increased tension as rocket and incendiary balloon attacks from Gaza toward Israel have intensified in recent days.

The IDF Spokesperson’s Unit said that the attack was carried out in response to the firing of incendiary balloons from the Gaza Strip toward Israeli territory.

On Friday, a “Red Color” siren was sounded in the city of Sderot and in Kibbutz Ibim.

The IDF confirmed that one rocket was identified as having been launched from the Gaza Strip toward Israeli territory. The rocket was intercepted by the Iron Dome anti-missile system.

“Work accidents” are common in Gaza, and often occur as terrorists are preparing to fire a rocket or when an underground terrorist tunnel collapses.