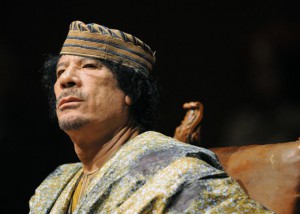 Members of the Islamic State militant group, also known as ISIS, were searching for buried money Tuesday in Libya near one of the homes of former Libyan leader Moammar Gadhafi in his hometown of Sirte, according to a new report. Around 30 members of ISIS were spotted carrying drilling equipment, looking for ammunition, weapons and cash, locals told the Libyan news outlet Alwasat Tuesday.

The terror group that has taken over vast swathes of Iraq and Syria has looked to expand its influence to Libya, in North Africa. The group has had a presence in the nation for a little more than a year. In that time, it has become the location of ISIS’ largest base outside of the Middle East. The group’s headquarters in Libya are in Sirte.

Sirte sits on the northern coast of Libya facing the Mediterranean Sea, about halfway between Benghazi and Tripoli, and only 400 miles from southern Europe. Gadhafi was killed in the coastal town in 2011 following a rebel overthrow of his regime.

Since his death and the disintegration of government in Libya, the nation has struggled to find stability. Libyan leaders have tried in vain to transition to a new regime, with fighting between two rebel factions spiraling into a civil war.

The power vacuum left ISIS the opportunity to move in. In the year since ISIS arrived to Libya, the group has greatly expanded their presence there. Libya has also served as a recruiting center for would-be militants, as paths through Turkey into Syria have become more difficult to traverse, with local authorities monitoring the borders.

Militants from the terror group stepped up their call for recruitment, especially for Westerners, via a social media campaign Sept. 28, Newsweek reported. “Libya is a much bigger market for Western recruits than Syria because if you look at the background of Western Muslims being from North Africa, Libya is right there,” London-based security strategist Olivier Guitta told Newsweek.