You are here: Home / Senza categoria / Funding Islamic State without knowing it 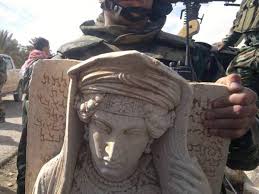 Ancient sites in Syria occupied by Islamic State extremists are being looted on an industrial scale, with cultural artifacts being smuggled into Western countries to fund the terrorist group.

Much of the remnants of Syria’s heritage smuggled into Britain and other Western countries remains highly desirable on the market and ends up in public institutions, museums, and private collections as a result, RT’s Anastasia Churkina reports.

Experts say the scale of the problem is much wider than most might assume, with ISIS not only destroying items of cultural value, but also making a serious profit off them.

Islamic State (IS, formerly ISIS/ISIL) currently occupies territories rich in archaeological treasures – including coins, ancient manuscripts, and jewelry – and is illegally exporting them to raise money for its extremist activities.

“Satellite imagery shows that archaeological sites in Syria are dotted by thousands of illegal excavations… that show there is looting on an industrial scale,” the head of UNESCO said on Wednesday, according to AFP.

“Limiting the trafficking in cultural property is a top priority because it finances the actions of the extremists,” she said at a conference.

Syrian cultural artifacts can be easily identified by their shape, insignias, and other diagnostic features, Mark Altaweel, an expert from the Institute of Archeology of University College London explained.

It’s much more difficult to figure out when an item ended up in Britain since there’s practically no supporting documentation, according to Altaweel. By the time an item arrives in Britain, there’s no way to prevent it from being sold.

“The chances of someone being seized, stopped and prosecuted are almost zero in the UK or anywhere in Europe, frankly.”

“We don’t know how much ISIS is benefitting from these objects. We know they are benefitting and we know it’s coming to the West. That’s indisputable… The scary thing is that we can be funding these groups without even knowing it,” he concluded.

The UN Security Council has recently imposed a ban on buying illegally obtained antiquities from Syria and Iraq, which is obviously not being observed by IS. Meanwhile, in an effort to prevent museums from purchasing those items, the International Council of Museums has issued an emergency red list of Syrian cultural objects at risk.