You are here: Home / West Asia / Funding for terrorists: Afghanistan remains a major drug hub for 2016 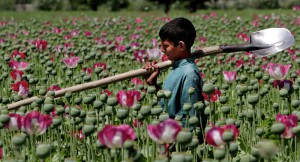 The Washington Examiner which is a political journalism publication based in Washington quotes Obama as saying that “[I]llegal poppy cultivation in Afghanistan is among the most difficult international drug-control problems.”

According to the media outlet, Obama further said that that Afghanistan has been the world’s largest poppy producer for 15 of the last 16 years.

Although, China has not been included on the major drug hubs lists but Obama expresses concern over China’s production of certain chemicals that can be used in synthetic drugs.

“The international community is also taking steps to focus attention on illegal drug activity in China, especially precursor chemicals produced in China that are diverted from legitimate commerce to criminal elements for the production of illicit plant-based and synthetic drugs,” Obama is quoted by the Washington Examiner as saying.

Obama has pointed that The United Nations is convening a special session focusing on combating drug production and trafficking globally next April.