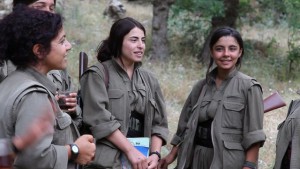 Growing numbers of young Iraqi Kurds are joining the Kurdistan Workers’ Party (PKK), despite the breakdown of the rebel group’s ceasefire with the Turkish government, which has unleashed repeated air strikes against its bases in northern Iraq.

The PKK is considered a terrorist group by the US and the EU as well as by Turkey, but young Kurds say they want to join its fighters in the battle against the Islamic State (IS) militants – partly out of frustration at the perceived failings of their own government in the semi-autonomous Kurdistan region.

Young Kurds appear to be undeterred by the risk of attack by Turkish forces – which sent ground troops into northern Iraq on Tuesday without Kurdish permission for the first time since 2011, in what was described as a “short-term” operation to hunt down Kurdish rebels.

Two battalions from Turkey’s special forces were said by officials to be in “hot pursuit” of those involved in a roadside bomb attack that killed 16 soldiers on Sunday.

“People are bored of unfulfilled promises from the government,” said a 23-year-old student from Kirkuk who asked that his name not be used, and who was planning to travel to the mountainous Qandil region to train as a fighter with the PKK.

He said that similar reasons were pushing other young Kurds to risk their lives by joining the PKK.

“If I believed and trusted in the political parties in Kurdistan, I wouldn’t go to Qandil,” he said.

The war with IS is taking an increasing toll on the Kurdistan region of northern Iraq, now suffering a financial crisis caused by stalled payments from the central government in Baghdad.

Disputes between the Iraqi government and that of the Kurdish region over budget and oil revenues are delaying salary payments to government workers, and to the official Peshmerga fighters battling IS on the front lines.

The region had prospered for more than a decade after the US-led invasion of Iraq, as oil companies took advantage of the relative political stability. But the war against IS has led to projects being abandoned and the skyline in the Kurdish capital Irbil includes scores of half-finished buildings, while the whole region is strained by hosting more than one million displaced Iraqis and refugees from Syria.

Democratic progress in Kurdistan has been stymied by corruption and nepotism, and young Kurds who came of age with Facebook, smartphones and American films are frustrated by regular power cuts and weak infrastructure.

The PKK spokesman Zagros Hiwa claims these factors have contributed to a “big increase” in the group’s recruitment of young Kurds from northern Iraq. The PKK fought a bloody, 30-year long insurgency with the Turkish state for Kurdish rights before a ceasefire was declared in 2013. At the end of July Turkey began air strikes against the PKK after an IS-linked bomb attack in the town of Suruc killed 30 pro-Kurdish activists, and PKK fighters hit back by killing Turkish police officers. The PKK has accused the Turkish government of aiding IS, something it denies.

Since then, Turkey has conducted hundreds of air strikes against PKK targets in northern Iraq, and in return rebels have killed more than 80 members of the Turkish security forces.

The renewed battle with Turkey, the war in Syria and the existential threat of IS have all spurred interest in the PKK, whose recruits are radicalised through the teachings of the group’s jailed leader, Abdullah Ocalan.

The Kurds, who number more than 30 million and live across Iran, Iraq, Syria and Turkey, have long suffered torture, killings and the denial of their rights by hostile governments. PKK fighters are meanwhile at the forefront of offensives against IS jihadists.

Serkeft, a 21-year-old PKK fighter from Kirkuk, was nursing shrapnel wounds to his arms and legs from an IS attack as he spoke to The Independent at a base south west of Irbil. He said that the new war against Turkey was not a distraction from the fight with IS; in fact, he said, they are one and the same. “We have enough guerrillas” for both fronts, he said, adding, “the Turkish government is the tree and we are fighting the branches.”

Mr Hiwa of the PKK says that around 100 young Kurds from Iraqi Kurdistan come to its bases in Qandil every month to join the group. The Independent could not verify his claims, but discussion with potential recruits, families of fighters and political organisations linked to the PKK pointed to its growing allure compared with Kurdish political parties.

Security officials in Kirkuk and the town of Halabja said they had no figures on how many residents had joined the PKK. Dr Saed Kakei, senior adviser to the Minister of Peshmerga, said that his ministry had “concerns” about people taking up arms with the PKK, but that “people are free to join any organisation”.

“Our mission is to professionalise the Peshmerga, not to advocate youngsters joining other organisations not under the control of the ministry of Peshmerga,” he said. Asked what motivated young Kurds to join the PKK he replied: “We do not take sides in political disagreements.”

Amanj Hamid from Kirkuk was killed by IS in the Syrian city of Hassakeh last year as he fought with the YPG, the Kurdish forces there that are aligned with the PKK. “When he saw them on TV he said, ‘They are the real Kurds, we have to help them’,” said Amanj’s brother Faridun in the family’s home in the south of Kirkuk. Mr Hamid left three years ago, aged 21, without a word. A day later he sent his mother a text message stating that he had “chosen the right way”. They neither spoke to him nor saw him alive again.

Jwan (not her real name), 23, said she was greatly affected by meeting female guerrillas of the PKK earlier this year. “I saw how the female fighters fight and I decided I want to be like them,” she said, “When I saw them I didn’t want to go home. I thought, ‘How come they have come here to protect us, why can’t we protect ourselves?’“

As a member of a PKK-linked youth organisation in Kirkuk she is learning about the ideology of Mr Ocalan. Every day she sees young people arriving to join up.

“Most are angry and want to go to Europe but they see they can do something for their country here,” she said.

“They’re angry because of politicians […] I am angry because the parties here have lots of money and a monopoly on power. They don’t provide for the people. When people see PKK fighters without salaries they see that they are good.”

But Jwan admits her mind is not fully made up and she is still thinking about whether to leave her family home for the group’s training camps in Qandil, “I haven’t decided to go for ever because of my mum – when you’re a guerrilla there is no time to visit family, no holidays or phone signal on the mountain,” she said.