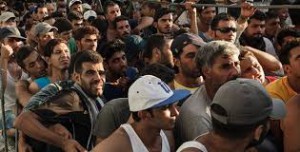 There were some 1.2 million irregular entries to the European Union in the first 10 months of this year, four times more than in the whole of 2014, the bloc’s border agency Frontex said on Tuesday.

The total number of irregular immigrants is lower than that because many people, notably who reach Greece then leave the EU again by crossing into Macedonia and re-cross the EU external border into countries like Hungary, are counted twice.

Frontex said in a statement that more than 150,000 people made the journey from Turkey to Greece in October, bringing the total arriving on Greek islands to more than 540,000 in the January-October period.

However, the number of people crossing by boat from Libya to Italy was just 8,500 in October, half the level of a year earlier. Some 140,000 have made that crossing so far this year, compared with nearly 155,000 in the same period of 2014.