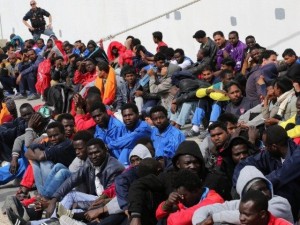 The head of the European Union border control agency says that about 350,000 migrants have arrived in the EU so far this year.

Fabrice Leggeri, executive director of the Frontex border agency, was quoted Saturday by German daily Ruhr-Nachrichten as saying about 180,000 people arrived via Turkey and the eastern Mediterranean, while 170,000 reached the continent across the central Mediterranean route from Libya and Egypt. That’s a sharp decline from 2015, when more than 1 million people arrived.

Leggeri said a deal between the EU and Turkey reduced the number of migrants coming from the East, but migration from northern Africa rose 30 percent.

The International Organization of Migration said Friday that 4,812 people died on the Mediterranean this year so far. That about 1,200 more than last year between January to the end of November.