You are here: Home / Mediterranean / From Turkey to Libya: half a million bullets and 5,000 weapons found on seized freighter 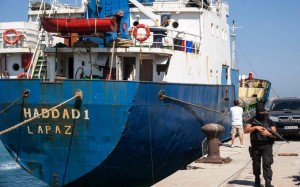 The Bolivian-flagged Haddad 1 freighter which was recently seized off the coast of Crete and was headed for Libya was carrying significant amounts of weapons and ammunition, with Coast Guard officials arguing that this is a very important case.

In a statement issued by the Coast Guard, Greek authorities has recovered a total of 419,950 9mm rounds of ammunition and about 5,000 police-style shotguns from two of the 14 containers that were on the Haddad 1. The weapons and ammunition were purposely hidden behind other items. The remaining containers are expected to be investigated by Friday.

According to Coast Guard sources, the ship owning company of the Haddad 1 is based in Alexandria, Egypt. The crew of four Syrians (one of whom is the ship’s captain) two Indians and one Egyptian is currently being interrogated in order to determine if they were involved with anyone in Greece.

The caretaker Minister of Shipping Christos Zois praised the Coast Guard officers who planned and carried out the operation for their major efforts and announced that more evidence and information on the significant case would soon become available.