You are here: Home / Mediterranean / From Turkey to Libya: Greece seizes freighter carrying over 400 tons of explosives

The Greek coast guard has impounded a freighter carrying explosives, allegedly to war-torn Libya. Authorities described the vessel as a “moving bomb”, like reported by dw.com. 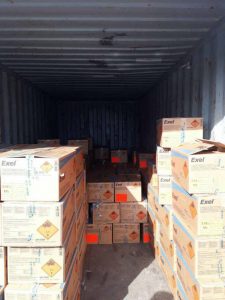 The Tanzanian-flagged freighter Andromeda was impounded at the port of Iraklion on Crete on January 6, the Greek coast guard said Wednesday.

Four days of inspections of the ship found 29 containers with explosives and detonators.

“The coast guard neutralized a moving time bomb that could have had unpredictable consequences both for people and for the marine environment,” Rear Admiral Yiannis Argyriou was quoted by Kathimerini as telling reporters.

Greek authorities stopped the ship south of Crete and brought it ashore after receiving a tip.

An international ban prohibits weapons shipments to Libya, where there is a civil war and multiple armed groups operate.

The explosives were reportedly loaded on the freighter in the southern Turkish port city of Mersin and destined for Djibouti and Oman.

The ship’s captain was later instructed by its owner to deliver the explosives to the Libyan port city of Misrata, the coast guard said.

The crew of five Indians, two Ukrainians and an Albanian were arrested. They are due to appear before a prosecutor on Thursday.