You are here: Home / MidEastGulf / From Mosul to Raqqa? A complex, risky battle against the Islamic State 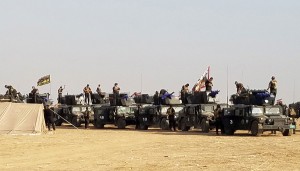 Simultaneous attacks on the Islamic State-held cities of Mosul in Iraq and Raqqa, the de facto capital of the militant group’s self-proclaimed caliphate across the border in Syria, would make military sense: such assaults would make it harder for the extremists to move reinforcements and deny them a safe haven.

When preparing for the Mosul operations this summer, U.S. officials said a push against the Islamic State in Raqqa could be almost simultaneous, putting additional pressure on the group by stretching its ability to defend two strongholds at once.

While the long-awaited Mosul offensive began earlier this week, there’s no sign of an imminent campaign against Raqqa.

Perhaps that’s because Syria is proving to be a more daunting terrain than Iraq. Going after Islamic State-held Raqqa would mean moving deeper into an explosive mix of regional and international rivalries, including a proxy war that has pitted the United States against Russia and its allies.

The fight against the Islamic State in northeastern Syria also underlines a U.S. reliance on its one effective partner there— Syria’s Kurds. Such an alliance for a Raqqa campaign threatens to ignite a new conflict, with another U.S. partner, NATO member Turkey, and its allied Syrian rebels.

In Iraq, the U.S. offers logistical and other support for the military in its fight against the Islamic State.

In Syria, Washington views President Bashar Assad’s government as illegitimate and cannot partner with him.

Even if the Islamic State were to be driven out of Raqqa, finding someone to administer the city would be problematic, said Noah Bonsey, a Syria expert with the International Crisis Group think tank.

Mosul is the largest city under Islamic State control, with an estimated population of up to one million and no more than 10,000 fighters. Oil-rich Raqqa is home to nearly 200,000 people, most Sunni Arabs, and an estimated 5,000 militants.

Bonsey said retaking Raqqa is key to defeating the Islamic State militarily, a U.S. priority, but that among the warring factions in Syria “everybody else has other geostrategic interests that take higher priority.”

In recent weeks, U.S.-led coalition airstrikes targeted half a dozen bridges in Syria’s largely Islamic State-controlled Deir el-Zour province between Raqqa and the Iraqi border. The strikes were aimed at cutting the road between Iraq and Syria for fleeing militants.

Activist Hussam Eesa reported increased Islamic State activity in Raqqa, including more night-time checkpoints, and said some wounded Islamic State families arrived from Mosul before the start of the offensive. He said there was no sign of panic in Raqqa. Most fortifications in Raqqa, such as trenches, were built long ago, said Eesa, who is not in the city and whose group, Raqqa Is Being Slaughtered Silently, relies on leaked reports from residents.

Raqqa could serve as a refuge for Islamic State fighters fleeing Mosul, even if roads are harder to access, said Jennifer Cafarella of the Washington-based Institute for the Study of War. Retreating fighters could also hide among fleeing civilians, or travel in small groups to evade coalition aircraft, she said. Others could withdraw to desert areas between Syria and Iraq for staging future attacks.

Since the summer’s discussions in Washington about a possible double-strike against the Islamic State, Turkey has entered the fray. Starting in August, Ankara has backed Syrian opposition fighters with tanks and aircraft.

This has complicated planning for a possible Raqqa campaign and threatened America’s main ally on the ground, the Kurds.

The rivalries are dangerous because the Islamic State is deft at exploiting divisions among its enemies, said Cafarella.

Kurdish fighters, mostly the well-trained and highly organized People’s Protection Units, or YPG, have been the U.S. partner in the anti-IS fight in Syria since 2015 when they freed the town of Kobani.

In return for leading the battle for Raqqa, the Kurds demand to be armed by the U.S. and to win political recognition of their right to self-rule.

That would enrage Ankara, which considers the Syrian Kurdish forces as an offshoot of its domestic rebels it deems a terrorist group.

Cafarella said directly arming the Kurdish forces would simplify logistics during planning for a major offensive.

But the potential for direct confrontation between the Kurds and Turkish and Ankara-backed Syrian forces “would cause a huge ripple in the strategy” and would be difficult for the U.S. to mitigate while conducting a major operation on the Iraqi side, she said.

Ilham Ahmed, a senior Syrian Kurdish official who was in Washington last month, claimed that preparations by Kurdish-led forces for such an offensive are in their final phase, suggesting U.S. recognition and arming are a matter of time. She did not provide details.

Fighting elsewhere in Syria has further complicated the situation, including a Turkish push in the northern Aleppo province and a bid for al-Bab, an Islamic State-run town in the area.

The Kurds are also vying for control of al-Bab, in hopes of connecting separate cantons they hold along the Syrian border with Turkey.

Meanwhile, Turkish troops and Syrian rebels argue that by advancing on al-Bab, they can break the Syrian government’s hold on the rebel-held besieged city of Aleppo city, 30 kilometers (18 miles) to the west, while also denying the Kurds their continuous territory.

“Both actors want to grab more territory to prevent the other from grabbing more territory and both want to improve the depth and breadth of coordination with the U.S. against the interest of the other,” Bonsey said.

Since August, Turkey-backed efforts have driven IS militants and Kurdish rebels from a large swath along the border.

The aim, Ankara said, is to set up an even larger “terror-free zone” of as much as 5,000 square kilometers (just under 2,000 square miles) inside Syria, trampling on the Kurdish aspirations. Adding to the complexity, Turkey, which backs anti-Assad forces, is seeking warmer ties with Russia, a major Assad supporter and an opponent of the U.S. in the proxy war in Syria.

On Tuesday, Turkish President Recep Tayyin Erdogan said his forces would take part in any Raqqa operation. Ankara is also taking part in the Mosul offensive, despite Baghdad’s protests.

An adviser to the Kurdish-led forces, Nasser Haj Mansour, said no Arab or Kurdish group would accept a Turkish role in Raqqa because this would effectively mean a long-term Turkish presence in Syria. He said the complex maneuvering may delay a possible Raqqa battle, which he said would require about 10,000 fighters, including Arabs, from the force he advises.

“The political conditions are not right and the military force that we have to retake these cities is complicated at best,” said Cafarella.