You are here: Home / Europe / From ISIS-lands to the Netherlands: Jihadists try to get the press to help them come home

As Mosul falls and Raqqa comes under attack, European jihadists have decided they don’t really love death more than their enemies love life. But… nobody wants them back, like reported by thedailybeast.com 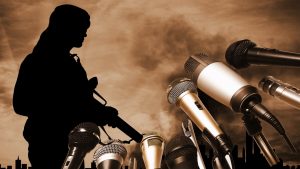 Now that the self-proclaimed caliphate of the so-called Islamic State is falling apart in Syria and Iraq, many European jihadists are looking for ways to come home—and some of the Dutch ones have been reaching out to the media, hoping it will save their lives.

Just last week two fighters contacted TV shows in the Netherlands to announce their return to Dutch soil, a third contacted the police.

The grim irony of such a ploy is obvious. Many would-be holy warriors from European backgrounds have been associated with organizations that took journalists hostage, ransomed some, tortured and beheaded others. When they thought their groups were on a roll, jihadists bragged to their Western enemies “we love death as you love life.” And all too many times in France, Britain, Belgium, and Germany they have slaughtered innocents by the score.

But the three from the Netherlands are part of a group of 10 presumed jihadists who have criminal court cases pending against them. Dutch public prosecutors believe most of them are still to be found in what’s left of ISIS-land. After a Rotterdam court recently decided they could be present at their hearing, their trial was postponed until January 2018, allowing them time to return.

A 22-year-old Dutch-Moroccan rapper known to the court as Marouane B. is one of the potential returnees. He says he is en route back to the Netherlands and a few days ago posted a rap about his intended return, singing, “I will come back one day, mama, don’t worry… I am fleeing.” (The video has since been taken down.)

In a phone call to Dutch News RTL, Marouane refused to say whether he is affiliated with ISIS or not. “I had expected to be a change factor in the civil war by fighting [Syrian dictator Bashar] Assad,” he said. “That didn’t succeed, because the world is siding with Assad, at least that’s what it looks like from here, and I always had the intention of returning after the war.”

In a similar interview, a Dutch postman turned Islamic convert turned Islamist, Victor Droste, spoke to the Dutch TV news program 1Vandaag via Skype. Droste admitted he’d been at the front, but refused to say whether he had been fighting. He fervently denied being part of ISIS, but he looked the part, and had been publicly advocating his support for Sharia and Islamism in the year before he left the Netherlands in 2013.
The Dutch government made conscientious attempts to inform the alleged jihadists about the trial via social media like Facebook and through their relatives. The efforts didn’t fail, but they are just the beginning of awkward attempts to address what could be an enormous problem.

An estimated 300 Dutch men, women, and children are known to have traveled to the Middle East to join the ranks of various jihadist organizations, including ISIS.

European Union counterterrorism coordinator Gilles de Kerchove has warned that the EU as a whole will be hard-pressed to deal with some 1,500 to 2,000 fighters who may try to return as ISIS is driven out of its strongholds in Mosul and Raqqa (PDF).

Different countries are addressing the problem in different ways. According to French intelligence sources, Paris has deployed special operations forces on the ground in Syria to hunt down and kill French jihadists who could pose a threat if they return.

The latest figures from the National Dutch Terrorism Prevention Coordinator (NCTV) tell us that as of June this year, 190 who left the Netherlands managed to join ISIS, and 50 returned. Some, at least 45 jihadists, died. But most of the survivors find themselves now cornered in a flailing wannabe state, a far cry from the heroic caliphate they had been dreaming of, and death has proved less appealing when it becomes palpably real.

With the jihadists’ stories trickling in, the Dutch security services try to gauge the security risk involved if they return. Even if the men are found not guilty of participation in war crimes and/or membership of a terrorist organization, which is unlikely, they are still suffering from PTSD. Letting them loose on the society they rejected would be risky business, and not just for the Netherlands.

“We have a responsibility toward other countries, too,” says Daan Weggemans, a terrorism expert attached to Leiden University who also serves as an expert witness in terrorism court cases. “Our focus tends to be on Dutch returning jihadists, but security is all about the broader picture. The idea that Dutch jihadists would only return to the Netherlands is not right.”

Jihadists are rarely stopped by borders, and certainly not by the open frontiers on the European continent, where they can take advantage of lax security in one place to stage attacks in another.

Exchanging information among security services is crucial, says Weggemans, but there are holes. Libya, for instance, is a major route for people pouring into Europe, but hardly keeps track of who is who, and there is considerable traffic back and forth. The bomber who wrought such carnage at a teen concert in Manchester, U.K., earlier this year was a Briton with extensive ties to family—and to ISIS—in Libya.

Foreigners who would come to the Netherlands with a stream of refugees might be a risk, says Weggemans, but so are jihadists who are in touch with, say, the nephew of a friend, and end up virtually invisible to authorities in an apartment here. “Those are the returnees that I worry about,” he says.

Islamist men returning from war are a major security risk. But then what are we to do with returning wives and children? After a serious amount of brainwashing they are hardly reliable candidates for free-spirited, democratic society. Differently put, how is any person who has actively supported people who put severed heads on spikes in town squares or gays being thrown off tall buildings going to deal with, say, two men kissing in the street in Amsterdam? Or mini skirts, or the notion of equal rights for women, for that matter?

Making policy on returning children poses yet another challenge. An estimated 80 children with a Dutch background are in Syria and Iraq, with ISIS or other jihadist groups, according to the April report of the Dutch National Security Service. Fifty percent are 9 years old or older and half of them are boys.

“With the minors there is also a big element of concern,” Weggemans explains. “They could have seen or done terrible things and were possibly trained a certain way. We know quite a bit about it and such information is very important if you start to help these children… You know that some were too young to be involved, others were educated there, girls were veiled, boys in training camps. We have to think about what we do when kids come back.”

So far, the Netherlands has been spared terrorist attacks. That may in part be because of internal policy, our relative insignificance, or dumb luck. Nobody knows precisely why. But the quiet to date holds no promise for the future. As in every other country, an attack on Dutch soil could happen any moment.

“I know it’s been said many times before, but we have to acknowledge that we won’t be able to prevent all attacks.” Weggemans tells The Daily Beast. Even if you have very active security services, you simply can’t keep track of everyone.

But the challenge of the moment is what to do with those who identify themselves and ask to be treated with mercy in a liberal society after the failure of the fanatical caliphate they longed to establish.