You are here: Home / Europe / From Charlie Hebdo to Bataclan, France overwhelmed by islamic radicals 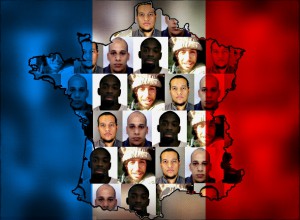 For a long time, we talked about the terrorist “nebula.”

It was a way to blur a much more specific and dangerous reality, says one diplomat with experience in combating terrorism. “The French government, as well as local municipalities, refused to see that jihadists were often linked between them, that they followed almost identical paths, that France of the 1980s-1990s gave rise to them,” says the source.

Warnings by sociologists such as Farhad Khosrokhavar were heard but had no impact. “I’ve never stopped repeating that these offenders, who became terrorists, suffer from chronic victimization,” Khosrokhavar explained in December, at the Maison des Sciences de l’Homme (“Home of Human Sciences”) in Paris. “They are consumed by a rage fueled by what they claim is, rightly or wrongly, their exclusion from the system.”

Then came the bloody year 2015. “We suddenly realized, by cross-referencing names, files and routes, that the core of these jihadists consisted of hardened criminals who, one way or another, escaped the reach of the justice system,” said criminologist Xavier Raufer in the wake of the attack against Charlie Hebdo.

Raufer coined the term “gangsterrorism” to designate the likes of Chérif and Said Kouachi, the brothers who carried out the attack on the satirical magazine; Amedy Coulibaly, who in the following days killed a policewoman and four Jewish shoppers at a kosher supermarket; or the eight men who 10 months later killed 130 in and around Paris on Nov. 13.

For too long, links between such killers were overlooked. The idea that, in France, convicted people on parole, sometimes compelled to wear an electronic bracelet, are able to miss their parole checks, meet up, exchange information in order to prepare attacks, or even visit known “gurus” as well as figures of the armed Islamic fight, was simply unthinkable. Big mistake.

The French Republic not only helped to create thousands of young Muslim fanatics, it has never built the right structures to monitor them, as evidenced by the role played by Djamel Beghal, that French-Algerian sentenced in 2005 to 10 years in prison for terrorism, deprived of his French nationality, convicted again in 2010, but still currently imprisoned in Brittany, in northwestern France, because the European Court of Human Rights is opposed to his deportation to Algeria.

“The Beghal case is the perfect model of radicalization. In prison, in 2005, this proclaimed Islamist fighter met the delinquents Coulibaly and Chérif Kouachi,” the diplomat close to the French intelligence services adds. “At first, they are simply all violent dropouts from society. Then, they are taught to consider themselves fighters of a revolution.”

Too little, too late

From one stage to another. From one conflict to another, too: “As long as the Islamists launched attacks against the Algerian military regime, it wasn’t that worrying. Especially as (the Algerian government) eventually won,” explains a former French intelligence officer.

Yet, the fire the Algerian Islamists started in the 1990s was never extinguished. On the contrary, it was fed by the guilty indifference of the Muslim majority. Historian Benjamin Stora talks about this in his book Les mémoires dangereuses (dangerous memories): “Only after the huge shock of January 2015 did those who belong to the Muslim tradition, culture, say we are French. All of us. Even if they said we’re not all Charlie.”

But already, it was too late. The poor educational background, the lack of credible punishments, the failure of cross-referencing by intelligence services, the absence of structures for the registered “radicalized,” and a far too tolerant regard for the opacity of certain Muslim places of worship opened a breach that will be complicated to close.

The Adda’wa mosque in Paris is a case in point, the scene of harsh internal fighting between associations of followers around its former Algerian imam Larbi Keichat. It’s impossible to know if Chérif Kouachi — who visited often in the early 2000s, when several young people close to this Islamic center left to join jihadist groups in Iraq — planned to carry out mass killings at the time. But one thing is certain: no one, except the police who arrested him for trafficking, looked into his case to attempt to establish his background. The good relations between the imam Keichat and the Ministry of the Interior were discouraging for those who wanted to take a closer look into the mosque.

“The legal system in France has not been able and still isn’t able to punish radical Islamic excesses,” our source says. “We keep on arresting these guys for small-time drug trafficking, so we release them straight away. Instead they should be quickly arrested for incitement to religious hatred,” a former police officer adds.

The former anti-terrorist magistrate Marc Trevidic insisted on that point at the parliamentary inquiry commission on jihadist networks. “There are objective criteria of danger that we’ve underestimated for too long,” he said.

The other aspect of this French failure is the emergence, in poor neighborhoods, of a jihadist Islam designed especially for the 15 to 20-year-old youth, who are cut off from parents and traditional imams. Before the parliamentary inquiry committee, Farhad Kosrokhavar explained: “Whether we like it or not, Islam in its jihadist version has become the religion of the oppressed. All those who feel the need to blame society can find satisfaction in it.”

Rivalries between imams have emerged, as battles take root over trafficking and secret financial circuits. Not far from the Bataclan concert hall in Paris where 89 people were killed on Nov. 13, local residents point to several Salafist bookstores, which they say serve as meeting points for preachers who, until then, were unknown in these areas.

As in the past, a network has been formed, in which criminal elements are eventually introduced. “Governmental policies on French Islam have frozen the debate,” explains a member of the French Council of the Muslim Faith. “Public authorities haven’t understood that we’re overwhelmed by fanatics. And until the attacks, we didn’t dare to admit it.”