You are here: Home / Africa / From Bosnia to Somalia: classifying “involvement” in armed conflict 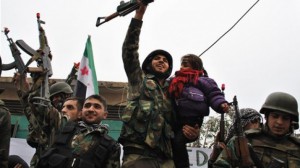 The laws governing armed conflict may seem simple on the surface. Soldiers can be targeted; civilians cannot. But the line between these groups is blurry and can have life-and-death implications.

Under international humanitarian law, or the laws of war, civilians can be intentionally killed if they “directly participate in hostilities.” But what does direct participation mean? What if a civilian feeds combatants, drives members of an armed group, provides equipment or intelligence, or takes up arms to protect family members? Does it matter if involvement was voluntary or forced? Do such actions mean the civilian can be lawfully targeted?

A new 84-page report, to which the International Human Rights Clinic contributed a case study, takes a fresh look at this contentious issue. The People’s Perspectives: Civilian Involvement in Armed Conflict, released Tuesday by the Center for Civilians in Conflict (CIVIC), documents the experiences of people in four former or current conflict zones: Bosnia, Libya, Gaza, and Somalia. It does not seek to come up with a conclusive definition of direct participation in hostilities. Instead, it aims to inform the debate among military commanders, lawyers, academics, and other experts by adding the voices of those who have lived through war.

The report finds that civilians become involved in conflict in a number of ways, ranging from fighting to providing logistical support to membership in civil defense forces or political parties. While sometimes voluntary, their involvement is often motivated by threats from armed groups or the need to survive. The people CIVIC interviewed had varied understandings of who is a civilian and who is a combatant and found it difficult to delineate the difference. They agreed, however, that the legal status that derives from involvement can not only determine whether civilians are targeted but also affect their lives long after a conflict ends.

In 2013, I led a four-person team, including Lara Berlin, JD ’14, Luca Urech, Fletcher ’13, and Nicolette Boehland, JD ’13, on a field mission to Bosnia, where we documented people’s experiences during the war. Later, as a post-graduate fellow at CIVIC, Boehland conducted investigations in three other conflict zones and served as lead author of the final report.

Testimony from those who lived through the Bosnia war of 1992-1995 highlighted the challenge of classifying involvement in a conflict. Some Bosnians told the Clinic’s research team that everyone during the armed conflict was a soldier, while others contended they were all civilians. A 40-year-old gardener from Srebrenica said, “The line between soldiers and civilians in war is invisible. . . . There is almost no line, no distinction.”

Residents of Sarajevo, for example, frequently fought on the front lines on certain days, but took off their uniforms and returned to their families on others. A woman who had lived through the city’s siege captured the confusion about the nature of these people’s involvement: “Many killed [during the conflict] were actually civilians, but I don’t know how to distinguish them. If my uncle is on duty, he’s one thing, but when he’s in line for bread, what is he?”

The stories of Bosnians and others in this report illustrate the modes, motivations, and complexities of people’s involvement in armed conflict. Experts and policymakers would do well to heed these realities as they continue their deliberations about the meaning of direct participation in hostilities.