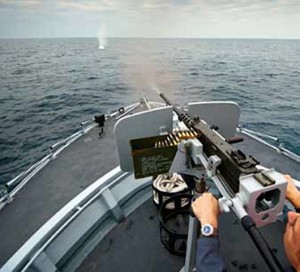 Two European naval boats involved in Mediterranean migrant rescue missions were engaged in friendly fire this week off the coast of Libya, in what is believed to be the first incident of its kind.

The Swedish coastguard vessel Poseidon, which is part of an EU-led border patrol and rescue mission, fired warning shots at an speedboat driven by the Italian navy, fearing that it belonged instead to smugglers. Twice in the past few months, Libyan smugglers have clashed with coastguards as the Libyans attempt to retrieve their boats once the migrants have been rescued from them.

A spokeswoman for Frontex, the EU agency that runs the border patrol mission, said no one was hurt or in danger, and the situation was soon clarified and resolved. Ewa Moncure said: “The Italian boat slowed down, and was able to be identified, and that was it.”

The incident, which was first revealed by the website Migrant Report, is thought to be without precedent, said Glen Forbes, the head of Oceanus Live, a firm specialising in maritime security analysis. “It is unprecedented that any coastguard vessel has targeted another during operations in the Mediterranean,” Forbes said. “The nearest to any conflict between coastguards may be that between Greek and Turkish vessels, but that is a protracted standoff.”

He argued that the clash was evidence of a lack of coordination between the various bodies involved in the Mediterranean rescue mission. At the moment, there are ships from the EU’s border-patrol mission, Triton; the EU’s military fleet, Navfor; Italy’s coastguard fleet; private rescue ships run by charities and philanthropists such as Médecins Sans Frontières (MSF); and commercial ships that happen to be in the area.

Forbes said: “The lack of a command and control mechanism encompassing all stakeholders is clear. Regional coastguard centres are hard-pressed to respond to so many calls – and each tasking of coastguard vessels, commercial shipping and some naval warships is proving difficult for personnel who have largely conducted coordination on a much smaller scale.”

In an interview with the Guardian in May, the senior Italian coastguards involved in coordinating the rescue response expressed frustration at how they are only able to command ships once an emergency was under way, rather than position them ahead of any likely migrant catastrophe.

Cpt Leopoldo Manna, who runs the Italian coastguard control room in Rome, and is therefore meant to coordinate the entire rescue mission in the southern Mediterranean, said: “I need to have assets already in the area to deploy in the places where [migrants] go. [But] the British ship is going to Palermo. She will remain in Palermo for two, three, four days.

“The German ship is here – it’s not under my orders. It voluntarily stays here, it’s a very good help, and I appreciate it so much. But I don’t have the ability to decide if she stays or if she goes. At the moment, I would have decided to not keep this vessel here. It is not useful here. I would have said: go inside the harbour, have a rest, pick up food and water, then wait two days.”

So far this year, coastguards have rescued in the region of 90,000 migrants from the southern Mediterranean. A similar number have crossed the eastern Mediterranean to reach Greece. A tiny proportion of them – between 1% and 2% – have reached Calais.