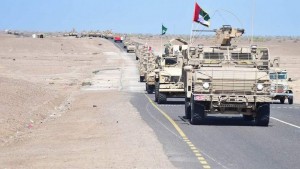 The second batch of Emirati soldiers has assumed its duties within the Arab coalition forces to give an impetus to the Yemen war.

The General Command of the UAE Armed Forces has said that the process of replacing the forces has been accomplished according to a systematic strategy and accurate military standards.

It explained that the first batch will arrive home over the next few days, where there will be an official reception for the brave soldiers who have stood with the Arab coalition forces, as well as the legitimate Yemeni people, against the putschists.

First Corporal Abdullah said they are so happy for the safe return of the first batch of the UAE heroes who were fighting in Yemen. “All our prayers and best wishes are for those heading to complete the mission and restore legitimacy there.”

“You have bravely exerted your utmost effort, and lifted the UAE flag high in the sky with your heroic acts,” he said.

As for those flying to Yemen to take part in Operation Restoring Hope, he advised them to defend their stand by right and justice. “Stick to the teachings of the Holy Quran and be always obedient to our prudent rulers,” Ali said.

Analysts have said a rotation of units to and from the frontline in Yemen is important for the overall success of the coalition’s campaign against Houthi militia and forces loyal to ousted president Ali Abdullah Saleh.

“It is vital to rotate troops in war zones,” he said. “We need to give the troops time to rest, regroup and refresh,” Riad Kahwaji, founder and CEO of Institute for Near East and Gulf Military Analysis, told Khaleej Times recently.

The replacement of the first batch comes after it achieved several victories, including the liberation of the historical city of Marib and Marib Dam, which was rebuilt by the late Shaikh Zayed bin Sultan Al Nahyan.

Citizens and residents also expressed support for the country’s participation in the mission. The war, they said, will help end sectarian clashes and restore hope for Yemenis.