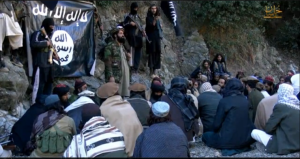 In Achin, a small district in eastern Afghanistan, governor Haji Ghalib Mujahid has called for an uprising. “Everyone who has a gun, a sword, anything, should fight these cruel people,” he said.

Mr Mujahid’s district, traditionally a Taliban hotbed, has recently been besieged by another insurgent force: Islamic State of Iraq and the Levant (Isil).

Although experts believe Isil currently poses only a limited threat to Afghanistan’s overall security, they appear to be flourishing in those areas where they have established a presence.

In Achin and neighbouring Shinwar districts, locals say hundreds have been killed, including dozens of civilians, in a brutal turf war between Isil and Taliban. Thousands more have been forced to flee.

Most of the self-declared Isil groups in Afghanistan are believed to be made up of disaffected Taliban members who have pledged allegiance to Isil leader Abu Bakr al-Baghdadi, often for propaganda or fundraising purposes. Formal links with the Isil leadership in Syria and Iraq have been difficult to prove.

However, in January Isil spokesman Abu Mohammad al-Adnani acknowledged the expansion of the jihadist group to Afghanistan for the first time. Isil is believed to be actively recruiting in Afghanistan, attempting to take advantage of divisions within the Taliban’s ranks in the wake of Taliban founder Mullah Omar’s death, despite warnings from the Taliban to stay out its heartland.

Over the course of a few bloody weeks, Isil jihadists have reportedly pushed Taliban out from Achin and Shinwar districts. They appear to be well funded and equipped, wearing Isil’s standard black uniforms and fighting under its black flags.

Malik Hakim, a tribal elder from Achin, said Isil fighters confiscated his harvest, his family’s only source of income. “There was no one to stop them,” he said.

The jihadists have also demanded that tribes hand over young men to fight for them, including boys as young as 13, said Haji Azim Khan, another tribal elder. Others were induced to join the ranks with a monthly salary of around $400 (£260), double what the average Afghan soldier receives.

Isil fighters were also going from house to house to identify young women and girls and forcing marriages on them, said Mr Khan. Anyone who had previously worked with the government was considered a spy and had been executed, he said.

Isil have showcased their brutality in Achin through graphic propaganda videos of beheadings and what appears to be militants blowing up tribal elders with explosives. Crying children of the executed tribal elders appeared on local television this week, shocking the Afghan public.

Mr Mujahid said he was aware of government plans for an operation against Isil, but at least until that point his district was badly suffering.

“No one really cares enough to eliminate Isil, not the Afghan government, the foreign forces or even the UN,” he said.

The battles between Isil and Taliban illustrate divisions within the global jihadi movement, but the faultlines are complex and frequently shifting.

Al-Qaeda leader Ayman al-Zawahiri, who has pledged allegiance to new Taliban leader Mullah Mansour, earlier this month hinted his group might be willing to work with Isil. If realised, that would be a stark about-turn in his previous opposition to the group, which he disowned in 2014 after it ignored his instructions to stay out of Syria.

However, experts say Isil’s extreme ideology is unlikely to take root in Afghanistan.

Graeme Smith, senior analyst with International Crisis Group, said Isil has had “a very slow start” in Afghanistan, and “they don’t have a lot of territory to show for it.”

Still, Mr Smith cautioned, while “it’s a tiny phenomenon right now, nobody knows how fast or far it will spread.”