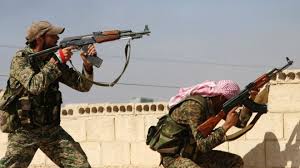 New clashes were reported Sunday between Kurdish forces and militias affiliated with the Syrian government in a major city in northeastern Syria, like reported by voanews.com.

The weekend fighting broke out in the city of Hasaka following a pro-Syrian government protest against Kurdish authorities, according to a local source.

“As the Asayish (Kurdish security forces) opened fire to disperse the protest, four protesters were wounded, one of whom died shortly after in the hospital,” Jindar Berekat, a reporter based in Hasaka, told VOA.

In response, militiamen affiliated with the Syrian government attacked a nearby checkpoint manned by Kurdish fighters, prompting a shootout between the two sides, local news media reported.

Hasaka is largely under the control of U.S.-backed Syrian Democratic Forces (SDF), a military alliance composed of Kurdish fighters and other groups that has been a major actor in the fight against the Islamic State (IS) terror group.

Pockets of the city, however, are controlled by the Syrian government forces and its affiliated militias. One such government-held area in Hasaka is the so-called “security square,” a small zone that hosts government headquarters.

The Syrian government has accused the SDF of imposing a heavy siege on the security square in Hasaka and the nearby city of Qamishli.

Local Kurdish authorities say their siege only targets government forces in the two cities, claiming that the move is a response to a government embargo on Kurdish civilians in the Shahba region, an SDF-controlled enclave in the northern province of Aleppo.

“For a while now, the Baath regime has restricted the movement of people and essential goods in the Shahba region,” Samar Hussein, co-chair of the Interior Department at the Kurdish-led Autonomous Administration in Northeast Syria, told local radio station Arta FM on Sunday.

She said that Kurdish authorities “tried a lot to convince the regime to lift its embargo but failed to do so, that’s why we decided to impose our own embargoes on their forces in Qamishli and Hasaka.”

In Hasaka, local reporter Berekat told VOA that while civilians are free to move in and out of the targeted area, Syrian government forces are blocked from getting out of the zone.

A VOA reporter in Qamishli said a similar blockade has been imposed on the city’s region where security headquarters are stationed.

Tensions between the two sides have increased in recent weeks. Last week, violent clashes took place in Qamishli when members of a regime-affiliated militia assaulted a Kurdish security outpost in the city. Two pro-government militiamen were severely wounded in the clashes.

Some observers attribute the rising tensions to broader political and military developments elsewhere in northern Syria.

“The SDF feels that Russia and the Syrian government could strike a deal with Turkey to remove SDF fighters from the town of Ain Issa,” said Shoresh Darwish, a Kurdish affairs analyst.

The northern town of Ain Issa, which is largely controlled by the SDF, has seen occasional attacks by Turkish-backed Syrian armed groups in recent weeks.

Russia, a staunch supporter of the Syrian government, also has a significant military presence around Ain Issa.

Turkey views the SDF as an extension of the Kurdistan Workers’ Party (PKK), a Turkey-based Kurdish armed group that is designated as a terrorist organization by Ankara and Washington.

Analyst Darwish said Russia and the government of Syrian President Bashar al-Assad “have been trying to use the Turkish presence as a card to weaken the SDF and pressure its U.S. ally.”

“The notion among the Kurds in Syria now is that Russia and the Assad regime want to create chaos in order to fully reclaim control of the region,” he told VOA.

The United States currently has some 700 troops in northeast Syria as part of a U.S.-led international coalition against IS militants.