You are here: Home / MidEastGulf / French ‘Unit 732’ volunteers in Iraqi Kurdistan fight against the Islamic State 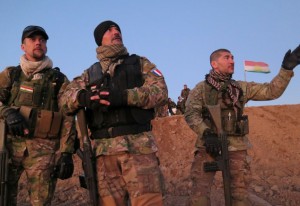 The translator rushed towards the rudimentary trailer housing the French volunteers who came to Iraq to fight against the Islamic State jihadist group alongside Kurdish Peshmerga forces from Iraq’s Kurdistan Region.

“Come quick, the general wants to see you! And bring your helicopter,” he told them, as an armoured convoy assembled and prepared to leave the base.

General Araz Abdelkader, who commands the Kurdish peshmerga forces stationed in Daquq, a town around 200 kilometres (120 miles) north of Baghdad, had just received information on possible jihadist movements near the front line.

What the translator calls a helicopter is in fact a small commercial drone which can be carried in a backpack and has turned out to be the French volunteers’ most valuable “weapon”.

Fred, Kim and Pascal are among six former servicemen from France forming the French contingent in Daquq, not counting Bella the dog, the group’s mascot.

They have called themselves “Unit 732”, a reference to the date of a battle that saw Frankish-led forces defeat the troops of the Umayyad caliphate in central France.

All six have significant military experience, but the peshmerga keep them mostly in the rear and they have not yet fired a shot in anger.

“We’re working on a training programme and, mostly, what we do is recon and intelligence gathering,” said Pascal, a Corsican sporting a salt-and-pepper moustache.

With 25 years’ experience in private security in France, Africa and the Middle East, he’s the group’s veteran.

The tiny contingent was welcomed by Iraqi Kurds, who are some of the main recipients of Western military aid to fight the Islamic State (IS) group.

France has good relations with Iraqi Kurdistan, and the Daquq front line, where the autonomous region’s forces are deployed, is one of the areas where the French jets that are part of the US-led coalition have been the most active.

“These six men are worth many more, they master some technologies we don’t,” the peshmerga general said. “They brought this drone from France, it is very useful to us.”

That day, the small device — which has a range of four to five kilometres (three miles) — flew across a wide open plain to monitor and record enemy movements without exposing a peshmerga reconnaissance unit on the ground.

The volunteers in Unit 732 got together on social media following the January attacks which IS claimed against satirical newspaper Charlie Hebdo and a Jewish supermarket in Paris.

“It started with Charlie Hebdo… something happened inside of me,” said Pascal, who wears the Kurdish flag on one arm patch and the French tricolour on the other.

Other foreigners have volunteered to fight alongside the Kurds in Iraq and Syria since 2014, but no Western country has been harder hit by IS than France and the deadly November 13 attacks in Paris spawned new volunteers.

“The attacks at the Bataclan (concert hall) sparked a wave… Many people want to join us now,” said Pascal, warning nonetheless against a mass influx.

Despite its name, the six Frenchmen insist on the apolitical and non-religious nature of the group.

“We’re not Crusaders, we didn’t come here because we’re unemployed or bored,” said Fred, another member of the

group who served 10 years in the army.

“We are all fathers and have families… We came here to defend our values,” he said.

Sipping tea at the little blue plastic table outside their trailer, the volunteers also speak of their love for adventure, and some of them feel confined to a token role.

“I don’t necessarily want to kill, and even less be killed, but we’d like to get more involved,” said one of Daquq’s Frenchmen, who gave his name as Kim.

He and his comrades are aware their presence is essentially a PR windfall for the peshmerga, who have cast themselves as the world’s first rampart against IS, and do not plan to stay longer than three months.

They could not afford to stay much longer, given that they all arrived in Iraq with barely enough cash for a hotel room and are only housed and fed by the peshmerga but not paid.

That is one of the conditions for a smooth return to France, where diplomatic sources say they are unlikely to run into any legal trouble, having not fought as mercenaries nor in the ranks of a terror-listed organisation.

France, a leading member in the coalition against IS, is busy trying to track the hundreds of nationals it has among the very jihadists that Unit 732 wants to battle.

Kim, himself a Muslim, explained that IS’ recruiting prowess in France was a motivating factor in his decision to come to Iraq.

“These people are not Muslims, they’re pigs,” he said. “I wanted to show that there were French people fighting on the other side too.”