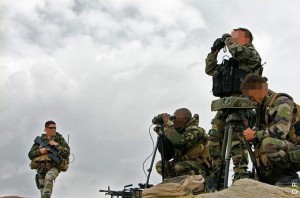 The French combat squad, consisting of 15 special forces, carried out four military operations against IS and other militant groups in Benghazi, the officials told The Associated Press. They said that French forces work with Libyan troops to pinpoint IS militant locations, plan operations and carry them out. They had also been training Libyan forces, they added.

According to the officials, the French forces were setting up an operations room in Banina air base in Benghazi alongside British and U.S. teams. They said that in addition to the special forces, a French intelligence unit is working with Britain and the U.S. units to collect information on the location of IS militants and their numbers.

Similar teams are also operating out of an air base in the city of Misrata, located to the east of the IS stronghold of Sirte, the officials said.

The Libyan officials spoke on condition of anonymity because they were not authorized to speak to the press.

The Libyan officials said the presence of Western forces was not welcomed by ultraconservative Salafist factions, who are allied with Libya’s eastern army and perceive the foreign intervention as an “occupation.”

Washington is counting on the UK, France and Italy to join the international coalition against IS extremists gaining ground in Libya. Last week, the U.S. carried out airstrikes against the extremist group’s position in the western city of Sabratha, killing dozens of fighters as well as two Serbian hostages.

Libya’s chaos, five years after the uprising that led to the ouster and killing of longtime autocrat Moammar Gadhafi in 2011, has allowed IS to take control of several cities. The divided country is ruled by two parliaments: an internationally recognized body based in the eastern city of Tobruk and a rival government, backed by Islamist-allied militias, that controls the capital, Tripoli.

The United Nations brokered a deal last year to unite the country’s various factions. A new unity government is awaiting endorsement by the eastern parliament. The unity government could pave the way international military intervention against the Islamic State group.

Also on Wednesday, Islamic State affiliates in Libya briefly took over the security headquarters of the western city of Sabratha, beheading 12 security officers before being driven out early in the morning, two city security officials said. The incident highlighted the enduring presence and unpredictable striking power of the local IS militants in the city, which serves as a hub for migrants heading to Europe.

Taher al-Gharabili, head of Sabratha Military Council, told The Associated Press that the gunmen “exploited a security vacuum” by deploying in the city center as the military was occupied conducting raids elsewhere.

A second security official said that the militants used the headless bodies of the officers they killed to block the roads leading to the security headquarters — which they occupied for about three hours. The official, who spoke on condition of anonymity because he was not authorized to speak to the press, said the total number of officers killed in the occupation and ensuing clashes reached 19.

Sabratha has become the latest Libyan power center for the local IS affiliate.

On Monday, Italy said it has agreed to allow American drones to be armed and take off from an air base in Sicily, but only to defend U.S. forces while they target Islamic State group extremists in Libya.

An Italian defense ministry official, speaking on condition of anonymity as the government hasn’t announced the deal, said Rome and Washington reached agreement last month. Permission will have to be asked of the Italian government every time, and decided on a case-by-case basis, for the drones to take off from Sigonella air base to protect military personnel deemed at risk during anti-IS operations in Libya and elsewhere in northern Africa. Permission won’t be granted for offensive missions under the arrangement.

So far the U.S. drones based in Sigonella have neither been armed nor requested to be used, the official said.