You are here: Home / Africa / French soldier killed in combat in Mali 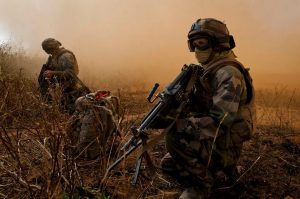 “This soldier … was killed in fighting against armed terrorist groups, when an improvised explosive device was triggered next to his armoured vehicle,” the presidency said in a statement.

France has more than 5,000 troops in the West African Sahel region as part of international efforts to fight Islamist militants in the area.

The news of the French soldier’s death came as leaders of five West African countries were holding a one-day summit in the Malian capital, Bamako, in a bid to resolve the country’s escalating political and security crises.

The presidents of Senegal, Ivory Coast, Ghana, Nigeria and Niger were meeting with Malian President Ibrahim Boubacar Keita and leaders of a protest movement clamouring for his resignation.

The unrest deeply worries Mali’s neighbours and allies, who fear a country bloodied by a jihadist insurgency could slide into chaos.

The impoverished nation of around 20 million people has been struggling to contain an insurgency that first emerged in the north in 2012 before spreading to its centre, as well as neighbouring Burkina Faso and Niger.

Thousands of soldiers and civilians have died in the conflict, and hundreds of thousands of people have been driven from their homes.

France started its military operations in Mali in 2013, after northern Mali was seized by Islamist extremists who had hijacked a Tuareg rebellion in the country’s northern desert regions the previous year.

The French military successfully drove extremists from several key towns, but the jihadist insurgency has since spread throughout Mali and across the border to Niger and Burkina Faso.