You are here: Home / Africa / French soldier killed by landmine in northern Mali 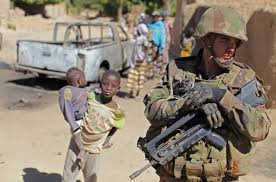 A French soldier has died during a military operation in northern Mali, the French presidency says.

The man was killed by a landmine while travelling in an armoured vehicle, the Elysee Palace says (in French).

The defence ministry said a convoy of vehicles was heading north from Gao to the town of Tessalit when a mine exploded under the lead vehicle.

Three other soldiers in the same vehicle were injured by the blast, it said.

President Francois Hollande expressed his “deep respect for the sacrifice of this young soldier in the service of our country”.

Some 3,500 French soldiers are deployed to five countries in the Sahel as part of Barkhane, a French-led operation against militant groups that began in 2014.

France has had troops in Mali since 2013 when it launched an operation against jihadists who had seized the northern half of the country.