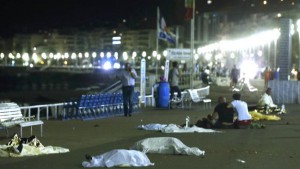 French police have detained 11 people suspected of providing logistical support, including arms, to the Tunisian who drove his 19-ton truck into a crowd of Nice revelers on Bastille Day, killing 86.

A judicial official says that 10 of the arrests were made Monday morning in the southeastern city and an 11th suspect was arrested in Nantes, in western France.

Agnes Thibault-Lecuivre of the Paris prosecutor’s office, which handles terrorism cases, said some of those arrested were from eastern Europe, notably Albania. Among other things, they are suspected of a role in supplying arms.

More than a dozen people linked to attacker Mohamed Lahouaiej Bouhlel have previously been arrested since the July 14 attack on the famed Promenade des Anglais.

The Islamic State group claimed responsibility for the attack.