You are here: Home / Europe / French police arrest five Muslims, including an imam, in connection with knife attack on Paris police station 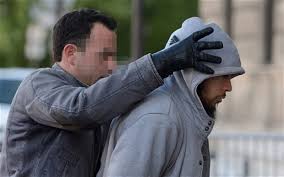 French police arrested overnight five people, including a Salafist imam, in connection with Mickael Harpon, the IT expert at Paris police headquarters who killed four colleagues in a knife attack this month, like reported by telegraph.co.uk.

Police swooped on the individuals in three locations in the northern suburbs of Paris around near the home of Harpon, 45, who was killed at the end of his stabbing spree on October 3.

The murders sparked soul-searching over how a man who converted to Islam 10 years ago and had adopted increasingly radical beliefs escaped detection despite working at a police intelligence unit whose job is to identity terror threats.

One of the people detained on Monday was an imam who preached at a mosque Harpon attended in Gonesse and who is on France’s “Fiche S” list of potential security threats.

Last week, the mayor of Gonesse announced that the Muslim association which employed the imam, who followed the hard-line Salafist branch of Islam, had dismissed him.

Detectives suspect that Harpon had been in close contact with the imam in the months before his killing spree.

Investigators also found that Harpon had a USB key holding propaganda videos of Islamic State of Iraq and the Levant (Isil) as well as details on dozens of officers, raising fears he intended to pass them to other radicalised Islamists.

However, Isil has not claimed responsibility for the attack despite mentioning it in a propaganda statement last week.

A string of inquiries have been launched to examine how Harpon, who had severe hearing difficulties, fell through the security net despite telling colleagues he welcomed the Charlie Hebdo attacks in 2015.

A former domestic intelligence agent in contact with colleagues told Le Journal du Dimanche: “They all told me: ‘We knew he was radicalised’. I deduce that people on the ground were aware but that information failed to rise through the ranks.”

Interior minister Christophe Castaner has ordered a security check on all French intelligence services by the end of the year and pledged to introduce “automatic alerts” over any questionable acts or beliefs in the force.