You are here: Home / Europe / French PM warns EU in ‘grave danger’ of collapse due to influx of migrants from Iraq and Syria 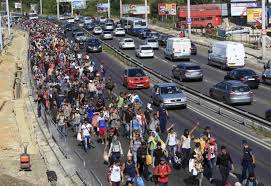 THE European Union is in grave danger of collapse because of the influx of migrants from war-torn
Iraq and Syria, the French prime minister warned yesterday.

Manuel Valls said he feared EU nations could be “totally destabilised” unless borders are tightened and leaders make clear that they will not accept all the refugees trying to reach the continent.

Yesterday, at least 45 migrants drowned as their boats sank off Greek islands.

And the scale of the problem – a million migrants last year – was underlined as Valls warned it jeopardised the EU’s existence.

He said: “It’s Europe that could die, not the Schengen area.

“If Europe can’t protect its own borders, it’s the very idea of Europe that could be thrown into doubt. It could disappear, of course, the European project.

“Not Europe itself, not our values but the concept we have of Europe, that the founding fathers had of Europe.

“That is in very grave danger. That’s why you need border guards, border controls on the external borders of the European Union.”

Britain is not part of the Schengen zone, where people moving between countries do not need to show their passports.

But yesterday, Prime Minister David Cameron said the UK was “happy to do more” to beef up borders around Europe’s passport-free group of nations.

Speaking in Prague after talks with his Czech counterpart, Cameron said the Schengen zone “has to have
a strong external border if you’re not going to have internal borders”.

He added: “Britain recognises that even outside Schengen, clearly it’s in our interests that we have the situation brought rapidly under control.

“That’s why we already make contributions to the external border Europe has – and we are happy to do more.”

Meanwhile, the PM looks set to abandon a key plank of his renegotiation bid at next month’s crunch EU summit.

And former Tory leader Michael Howard piled pressure on Cameron by saying a deal good enough to keep Britain in the EU was “not looking very likely”.

It was publicly confirmed for the first time yesterday that EU leaders are looking at alternatives to a four-year ban on migrants’ benefits.

The PM believes benefits are an “artificial draw” to the UK and hopes to strike a new deal between Britain and Brussels before calling an in/out referendum on our EU membership.

But Czech PM Bohuslav Sobotka revealed EU leaders were working on other measures – including an “emergency brake” on migrants coming to the UK.

Sobotka said: “We discussed other possible alternatives to meet the same objective – i.e. make it possible for the UK Government to respond to the mass influx of workers.

“The option involves giving a member state a possibility of an emergency brake if there is enormous pressure on its social welfare system.”

Sobotka believes allowing Britain to cap migrant numbers for a set period would be of significant help and can be discussed further.

But Cameron insisted his plan to curb migrants’ benefits “remains on the table until I am satisfied there
is an alternative which is equally powerful and works just as well”.

The issue is set to dominate next month’s Brussels showdown where European leaders will try to thrash
out a deal.

Cameron also hit back at Sir Michael Caine yesterday after the Oscar-winning actor called for Britain to quit the EU unless the PM secures major changes.

The Italian Job star, 82, told the BBC: “Unless there is some extremely significant changes, we should get out.”

But Cameron said: “Everyone will have to make up their own mind about this very important question
for Britain and for Europe.”