Speaking at the Economic Forum in Davos, Valls fears the flow of those fleeing war zones is placing the concept of Europe in grave danger. 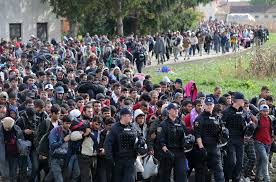 The French prime minister, Manuel Valls, has said Europe cannot take in all the refugees fleeing wars in Iraq and Syria and that the crisis was putting the concept of Europe itself in grave danger.

Speaking to the BBC at the economic forum in Davos, Valls said Europe needed to take urgent action to control its external borders. “Otherwise,” he said, “our societies will be totally destabilised.”

Asked about border controls inside Europe, which many fear put the passport-free Schengen zone at risk, Valls said the concept of Europe was in jeopardy. “If Europe is not capable of protecting its own borders, it’s the very idea of Europe that will be questioned,” he said.

He said a message to refugees that says “Come, you will be welcome”, provoked major shifts in population.

“Today, when we speak in Europe, a few seconds later it is mainly on the smartphones in the refugee camps,” Valls said.

On Thursday in Davos the Dutch prime minister, Mark Rutte , said Europe was close to breaking point and needed to come up with a common response or run the risk that one of the European Union’s founding principles would start to unravel.

“We need to get a grip on this issue in the next six to eight weeks”, Rutte said.

He said in the first three weeks of this year 35,000 people had crossed the EU’s borders and this would quadruple once the spring arrives. “We can’t cope with the numbers any longer. We need to get a grip on this.”

Rutte said that before the Schengen agreement was killed off, the EU had to try to make the Dublin regulation – under which refugees should seek asylum in the first country they reach – work. “No one wants to kill Schengen, but if it is only a fairweather system then it cannot survive.”

Sweden’s prime minister, Stefan Löfven, expressed doubts about whether the tight timetable set by Rutte could be met. “I’m not naive,” he said. “My argument to the countries that are not willing to accept refugees is that if we can’t handle this the European Union is at risk. If we cannot do it there is a risk to Schengen.”

Austria had announced on Wednesday that it planned to limit the number of people allowed to apply for asylum to 1.5% of its population over the next four years. For this year, the government said in a statement, the number would be capped at 37,500.

Germany’s finance minister, Wolfgang Schäuble, said he did not even want to contemplate whether Germany, which accepted more than 1 million refugees in 2015, could cope with a similar number this year. He said Europe had to be prepared to spend billions on a crisis that would cost a lot more than envisaged.

Jim Yong Kim, the president of the World Bank, said the refugee problem had intensified and he had been asked by the UN chief, Ban Ki-moon, to rethink the humanitarian response to the crisis so that emergency assistance formed part of a long-term development plan.

Speaking to the Guardian in Davos, Kim said the bill for refugees was soaring and a new approach was needed. “People are attached to staying where they are but there has to be hope of finding work. “We have to build up the productive capacity of countries with large numbers of refugees. We have to make it attractive to stay in these countries.”

Gordon Brown called for governments, business and charitable foundations to provide the money to put every Syrian refugee child in school, as he warned that the greatest humanitarian disaster since the second world war risked creating a lost generation.

The former British prime minister, now the UN special envoy for education, told the Davos economic summit that the current market turmoil should not be used as an excuse for inaction.

He said: “Whatever the difficulties in financial markets and whatever difficulties countries have with their individual aid budgets, we have to come together in the face of this great humanitarian crisis.”

Justine Greening, the UK’s international development secretary, strongly backed the idea of spending more on schools as part of a comprehensive approach designed to build up economies in the Middle East.

She said: “Billions of euros can be spent on failure or they can be put it into a constructive, positive response which meets what the refugees really want – education and a job.”