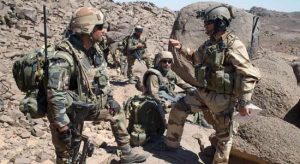 French and Nigerien troops conducted operations near Niger’s border with Mali on Thursday, the day after an attack that killed three U.S. Army Special Forces members, security sources said according to reuters.com.

The attack, which also wounded two U.S. soldiers and killed at least one Nigerien soldier, took place during a routine patrol in a part of southwestern Niger where insurgents, including from al Qaeda in Islamic Maghreb (AQIM), are active, a U.S. official told Reuters.

“It’s not clear if the attackers knew the Americans were present,” said the Western security source. “Initial information suggests there was a trap that appeared designed to get them out of their vehicles and then they opened fire.”

The source said al Qaeda and a relatively new militant group called Islamic State in the Greater Sahara were the two main suspects, although no one had yet claimed responsibility.

Two additional Niger security sources said that four military helicopters had been dispatched to the area and that reinforcements arrived on Thursday morning in the Tillaberi region where the attack took place.

A Nigerien regional official said on Wednesday five Niger soldiers were killed in the attack although a statement by U.S. Africa Command on Thursday said that only one “partner nation member” had died.

In a speech on Thursday, Niger President Mahamadou Issoufou condemned the attack. “Our country has just been the victim of a terrorist attack that claimed a large number of victims,” he said.

Islamist militants form part of a growing regional insurgency in the poor, sparsely populated deserts of West Africa’s Sahel. Jihadists have stepped up attacks on U.N. peacekeepers, Malian soldiers and civilian targets since being driven back in northern Mali by a French-led military intervention in 2013.

Malian militant groups have expanded their reach into neighbouring countries, including Niger, where a series of attacks by armed groups led the government in March to declare a state of emergency in the southwest.

The European Union has pledged tens of millions of euros to a new regional force of five Sahelian countries – Niger, Mali, Chad, Burkina Faso and Mauritania – in a bid to contain Islamist militant groups, and the United States also views the region as a growing priority.

The United States operates surveillance drones out of central Niger and said last year it was building a new $100 million base to boost efforts by its ally to combat jihadists and better protect its porous borders.

It has also sent troops to supply intelligence and other assistance to a multinational force battling Nigerian Boko Haram militants near Niger’s border with Nigeria.