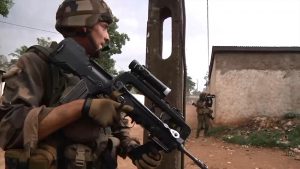 French and Malian armed forces killed at least a dozen Islamic extremists who attacked an army camp in northern Mali Tuesday, killing at least four soldiers and wounding another, according to a statement by the French Operation Barkhane, like reported by ap.org.

French air forces, alerted by Mali’s army, responded as the assailants fled in two pick-ups, according to the Operation Barkhane statement.

The town has been targeted regularly by Islamic extremists.

Also Tuesday, a United Nations peacekeeping mission vehicle was escorting a logistics convoy when it hit a land mine about 30 kilometers (18 miles) south of Tessalit in the Kidal region, the U.N. mission said. Two peacekeepers and one civilian were wounded, it said.

The Mali-based al-Qaida affiliate Nusrat al-Islam wal Muslimeen claimed responsibility for the attack and for another one on U.N. forces in the Kidal region, according to the SITE Intelligence Group.

The extremist group said it destroyed two U.N. vehicles on the road between Aguelhok and Tessalit on Monday and hit the same convoy Tuesday.

Ansar Dine, Al-Mourabitoun and al-Qaida in the Islamic Maghreb in March declared they had merged into Nusrat al-Islam wal Muslimeen.

A French-led intervention drove Islamic extremists from strongholds in northern Mali in 2013, but attacks continue.