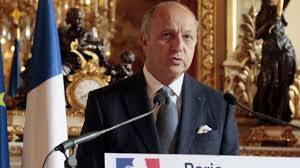 French Foreign Minister Laurent Fabius indicated Friday that his country is open to working with Syrian government troops to combat the Islamic State militant group, a suggestion that has angered the Syrian opposition.

“There are two measures: the bombing, and there should be ground troops. The ground troops can’t be ours, because that would be counterproductive, but the grounds troops could be at the same time Syrian Free Army forces, Sunni Arab forces and – why not – forces of the regime,” Fabius said on RTL radio.

France has been staunchly opposed to the continued rule of Syrian President Bashar al-Assad, and prosecutors in Paris have opened a criminal inquiry into torture and human rights abuses under his regime.

Several figures in the Syrian opposition balked at Fabius’ idea.

“Such a move will only serve interests of al-Assad, who is the biggest terrorist,” said Ahmad Ramdan, a member of the main opposition Syrian National Coalition.

“Such a statement only gives al-Assad a new card to further maniupulate the Syrian problem,” Ramadan told dpa.

The Western-backed opposition, fighting to oust al-Assad, has repeatedly said he has no role to play in the future of Syria.

“Al-Assad does not have a real army fighting on the ground,” Ousama Abu Zeid, a leagal adviser to the opposition Free Syrian Army, said.

“His battles are being led by loyal militias,” Abu Zeid told dpa.

He was referring to fighters from allied Iran and and the Lebanese Shiite movement Hezbollah, who are battling along al-Assad’s troops against a wide array of rebels.

Al-Assad, who has been in power since 2000, has secured significant military support from his ally, Russia, which launched an air campaign in Syria in September.

Louay Hussien, the head of the Building the Syrian State Party, an opposition group tolerated by al-Assad’s regime, said direct cooperation between France and al-Assad is “difficult.”

“There can only be an indirect cooperation through Russia,” Hussein said.

“France is in a critical situation because they have been saying for years that al-Assad must go. Such a move marks backing for al-Assad and allows him to gain victory at this phase.”

France has intensified airstrikes in Syria since the November 13 terrorist attacks in Paris that killed 130 people.

The attacks were claimed by Islamic State, which rules vast territory in Syria.

On Thursday, French President Francois Hollande and his Russian counterpart Vladimir Putin agreed to coordinate their countries’ airstrikes in Syria during talks in Moscow.

The Kremlin’s support for al-Assad has drawn criticism from France and members of the US-led coalition conducting airstrikes in Syria and neighbouring Iraq.

Putin and Hollande agreed to focus their joint efforts on combatting terrorism.