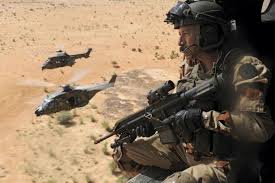 The French army has seized “significant” caches of weapons during an operation in northern Mali, where it is helping local forces battle jihadists, Defence Minister Jean-Yves Le Drian said.

Around 1 500 French troops are deployed in Mali as part of the fight against al-Qaeda-linked jihadist groups which took control of the country’s north in 2012.

Le Drian, speaking to journalists on the sidelines of a security forum in Senegal’s capital Dakar, said the operation targeted “identified trafficking zones” as well as the sites of stashed weapons. He said the operation involved “fairly strong action”, but no combat.

Large parts of Mali remain beyond the control of government and foreign forces, despite the French-led mission launched in 2013, and last month three French special forces soldiers were wounded in a landmine blast in the north.

The troops in Mali are part of a 3 000-strong French force fighting jihadists in west Africa under Operation Barkhane.

While jihadist attacks in Mali were previously concentrated in the north, they have spread to the centre and south of the country this year.