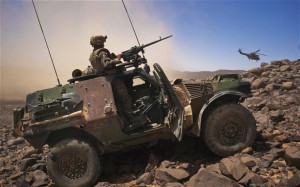 French forces in Mali have killed or captured some 10 Islamist fighters belonging to a group that claimed last month’s attack on a hotel in the capital, Bamako. Earlier this week Mali reinvoked a state of emergency.

French forces in northern Mali “neutralized” about ten fighters in a weekend operation against the al Mourabitoun Islamist group, which alongside other jihadist groups claimed responsibility for the attack on Bamako’s Radisson Blu hotel last month, France’s ministry of defense said on Tuesday.

“French forces carried out an operation in the region of Menaka in Mali against an element of the terrorist group al Mourabitoun responsible for numerous attacks,” the statement said. “Some 10 terrorists were neutralized. A large quantity of arms and explosives were seized,” it added.

The attack was claimed as a joint operation by al Mourabitoun and al-Qaeda in the Islamic Maghreb. Another jihadist group, the Macina Liberation Front also later claimed responsibility in cooperation with the Ansare Dine group.

Jihadist groups tied to al-Qaeda gained control over large swaths of northern Mali in 2012 before being largely pushed back by a French-led military intervention in 2013 to restore order.

France supports a UN mission to bring peace to Mali and fight jihadist groups operating in lawless areas in the north.

On Monday, Mali declared a state of emergency for the rest of the year to thwart any potential terrorist attacks.