In a weekend operation involving airstrikes, French forces have reported killing or capturing 20 jihadists hiding in a forest near the border between Mali and Burkina Faso. A French soldier had been killed last month, like reported by  dw.com 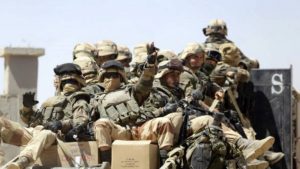 A statement from the French regional force in Mali said the operation involved air and ground forces but it did not identify which militant group had been attacked. Operation Barkhane is an ongoing anti-insurgent operation in Africa’s Sahel semi-arid region.

The militants were targeted in a forest in the southwest of Gao province in an operation which began on Saturday, Colonel Patrik Steiger, a military spokesman told AFP on Sunday. The operation began with air strikes by Mirage 2000 jets on supply depots which had been located in an earlier operation.

The French “force has been engaged in an operation in which it was possible to neutralize about 20 terrorists in the Foulsare forest near the border between Mali and Burkina Faso,” Steiger said. Helicopters transported ground forces who had found weapons including rocket launchers and ammunition.

Steiger said the militants were either killed or captured, but he did not give further details.

The operation took place in an area where a French soldier had been killed on April 5. On Saturday, Mali’s National Assembly voted to extend a state of emergency by six months in a bid to control an upsurge in attacks.

There are 4,000 French soldiers deployed in the region since 2014 as part of Operation Barkhane, named after a crescent-shaped dune in the Sahara desert.

The French counterterrorism operation is being carried out in partnership with five countries and former colonies which span the Sahel: Burkina Faso, Chad, Mali, Mauritania and Niger – collectively referred to as the “G5 Sahel.”

French, Malian and UN forces are regular targets of attacks in the area.

On April 20, France “welcomed the establishment” of interim authorities responsible for the five regions of northern Mali.