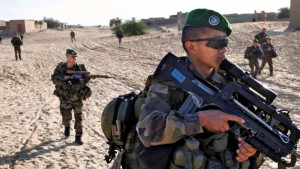 A dozen armored vehicles approached Bouraima Adamma and his colleagues, who were resting under a tree. French soldiers got out, searched the men’s belongings and confiscated Adamma’s AK-47 and ammunition.

The French captain explained that Adamma is not a member of the Malian army and therefore not allowed to carry weapons.

A peace deal in May came after months of negotiations in Algeria between Mali’s government, Tuareg separatist groups and armed groups allied with the government. On June 20th, rebel groups travelled to Bamako, the capital, to ratify the agreement.

But a disarmament plan to prevent tensions from rising again has yet to be enforced.

“Our leader in Gao told us to leave Menaka because all is well since the peace accords,” said another member of his group, Hassan Husseini Diallo. “He told us to go back to care for the cattle. They will call us to bring in our weapons.”

These men gave up their arms peacefully, but it’s unclear how arms will be collected across the vast desert region of northern Mali. French forces intervened in 2013 after Islamic extremist groups took over areas of the north following a grab by separatist groups.

U.N. Mali mission spokeswoman Radhia Achouri said the “disarmament itself is the responsibility of the signatories.” However, since the peace deal was signed, these French forces are assisting Malian authorities in confiscating weapons.

The deal has increased people’s hopes.