Some young men and women leave France to start families in Syria, according to those who study the radicalization of French residents. 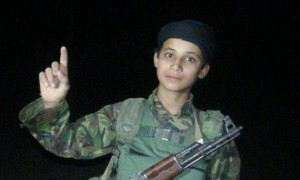 Valérie Aubry-Dumont got the news in a WhatsApp message from deep inside Islamic State territory. “Mom, you’re going to be a grandmother,” wrote her teenage daughter, Cléa.

When Ms. Aubry-Dumont last saw her daughter, Cléa was a 16-year-old girl attending Catholic school in a Paris suburb. After a breakup, Cléa met a young man online and within months the couple fled France to live in a stretch of northern Syria ruled by Islamic State.

“I wish Cléa never had children,” Ms. Aubry-Dumont, a child-care worker, says now that her grandson has been born. Her daughter talks some days of returning to France, Ms. Aubry-Dumont said, but is afraid of losing her baby if she tries to leave. “She is trapped.”

In France, the West’s biggest supplier of foreign fighters in Syria, the loss of sons, daughters and grandchildren to Islamic State has been a slow-motion tragedy. For some French families, the Paris attacks, while deepening the wedge between militants and the West, were a painful reminder of their ties to the enemy.

The French wife of Foued Mohamed-Aggad—who along with two others killed 90 people in Paris’s Bataclan concert hall on Nov. 13—is living in Islamic State territory and ready to give birth “any day now,” said Françoise Cotta, a lawyer Mr. Mohamed-Aggad’s mother approached in an attempt to bring the child back to France.

“An alarming number of young men and women are leaving France to start a family in Syria,” said Alain Ruffion, director at Unimed, a group that works to prevent the radicalization of residents around the southern French city of Nice.

Raising children in Islamic State-held territory bolsters its ranks. More than 1,100 children under age 16 joined its training camps this year, according to the Syrian Observatory for Human Rights, a U.K.-based opposition monitor. The alleged ringleader of the Paris attacks, Abdelhamid Abaaoud, had brought his 13-year-old brother to Syria to join the militants. Mr. Abaaoud was killed last month by police.

The number of children born of a French parent joined to Islamic State is nearly impossible to tally, authorities said. The French government estimates that about 50 children have been taken to Syria since 2012.

Among them was a 5th-grade boy named Rayan, who stopped showing up at his redbrick elementary school on the outskirts of Toulouse in April 2014. He resurfaced nearly a year later—in an Islamic State video.

Rayan appears clad in military fatigues, holding a handgun. At his side is Sabri Essid, a radical who married Rayan’s French mother and moved her and her four children to northern Syria, French officials said.