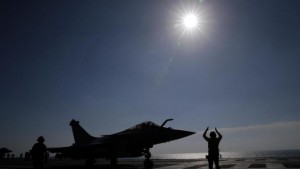 Just after sunrise, eight fighter jets and a surveillance plane roared off the runway of the jewel of the French navy’s fleet, part of the country’s war against the Islamic State group following the attacks on Paris.

Planes from the French aircraft carrier Charles de Gaulle have already provided cover for Iraqi troops fighting in the besieged city of Ramadi following the vessel’s deployment Nov. 5. That shows that while the Islamic State group “still taunts us, (it) is no longer capable of holding the ground,” French Rear Admiral Rene-Jean Crignola told The Associated Press.

“The Paris attacks reinforced the determination of the crew and of our fleet,” said Crignola, the first foreign commander to lead Task Force 50, which conducts airstrikes in territory in Iraq and Syria overseen by the U.S. Navy’s Bahrain-based 5th Fleet. “It’s on everyone’s mind. The sense of purpose of our men is crystal clear.”

France has been one of the most active members of the American-led coalition, and is the only nation aside from the U.S. to bring an aircraft carrier to the fight.

French President Francois Hollande ordered the nuclear-powered Charles de Gaulle to the Gulf just days after Islamic extremists launched a deadly attack on the Paris office of satirical newspaper Charlie Hebdo in January 2015, killing 11 people inside and a police officer outside.

Then came the Nov. 13 attacks on Paris, claimed by the Islamic State group, which killed 130 people. The French again dispatched their aircraft carrier, which carries 18 Dassault Rafale M and eight Dassault Super Entendard fighter jets, along with E-2C Hawkeye surveillance planes and other aircraft.

The tour by the Charles de Gaulle is due to end in March, when the ship will return to its homeport of Toulon.