You are here: Home / Europe / French army should be deployed in Calais 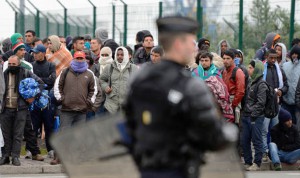 French authorities should deploy soldiers in order to secure the port of Calais, a UK haulage boss has demanded following fresh incursions by migrants.

The port in northern France was closed on Saturday and services were disrupted overnight after about 50 migrants briefly boarded a UK-bound P&O ferry.

The incident happened during a protest at the port in favour of migrants.

Richard Burnett, chief executive of the Road Haulage Association, called for authorities to back “decisive action”.

He said the incident was the latest in a string of recent incursions in Calais, warning it was “only a matter of time before our worst fears become a reality and a UK-bound truck driver is killed”.

“This shocking breach of security clearly shows that the migrant mayhem in and around Calais is not being tackled,” he said.

“It is now time for the authorities to acknowledge and meet our demand for the French military to be deployed to secure the port and its approaches.”

He added: “The number of migrants in the camp has escalated, the number of attempts – violent attempts against drivers – has been escalating, and we think now, after yesterday’s incident, enough is enough, the time for discussion’s over – we need action.”

Damian Collins, Conservative MP for Folkestone and Hythe, backed Mr Burnett’s call, telling the BBC it was “incumbent on the French authorities to protect the port”.

“If that requires deploying the military, then the French should do that,” he added.

P&O Ferries tweeted that services on Sunday were “operating to schedule”, following delays of up to two hours on Saturday night.

The latest incursion happened as a demonstration, held in support of migrants, was reported to have attracted a crowd of about 2,000 people.

Some of the protesters at the demonstration carried banners saying “refugees welcome here”. People from Britain were among the demonstrators.

It comes as thousands of migrants are currently living in camps known as “the Jungle” on the edge of Calais.

The population of the camp has risen steadily in recent weeks to about 2,500, including about 250 children, according to medical volunteer group, Medecins Sans Frontieres‎.

In August last year, the UK and France signed an agreement on new measures to try and alleviate the crisis, including a new command centre to help tackle trafficking gangs.

The situation in Calais comes amid an influx of migrants to Europe – caused largely by people fleeing war and oppression in countries such as Syria, Afghanistan and Eritrea.

Elsewhere on Saturday, Jeremy Corbyn visited a migrant camp in northern France and spoken of the “dreadful conditions” there.