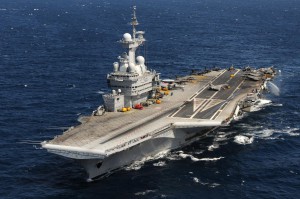 The French aircraft carrier FS Charles de Gaulle (R 91) conducted its first missions against ISIS from the Arabian Gulf as the flagship for Commander Task Force (CTF) 50 on Dec. 20.

In a move that demonstrates the interoperability and partnership between the naval forces of the U.S. and France, the French Navy is leading carrier-based naval strike operations for Operation Inherent Resolve (OIR) – the fight to degrade and ultimately destroy the ISIL terrorist organization.

The carrier and embarked air wing, along with the other ships in her battle group, will support operations over Iraq and Syria. She will also provide a range of flexible and adaptable capabilities to perform theater security cooperation efforts and maritime security operations aimed at increasing the French Navy’s interoperability with allies in the region.

The battle group left its homeport of Toulon, France, Nov. 18.