You are here: Home / Europe / France’s Fabius says anti-ISIS coalition must be reinforced 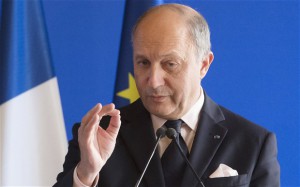 Iraq and Syria risk further division if international efforts to tackle ISIS militants there are not stepped up quickly, France warned Tuesday.

Foreign Minister Laurent Fabius, speaking ahead of a June 2 meeting in Paris of nations fighting ISIS, also said Iraq’s government had not honored commitments to its partners to represent the interests of all sectors of its society.

He further said Syrian President Bashar Assad had lost control of his country and that a political solution between elements of his government and the opposition needed to be found quickly to “save Syria.”

“In Iraq, like Syria, international mobilization must be strengthened very quickly or else we are heading towards the division of one or the other country, if not both, with new massacres and disastrous consequences,” Fabius told lawmakers without elaborating on what reinforcements he wanted.

The Iraqi government is scrambling to reverse its biggest military setback in nearly a year – the fall of Ramadi, capital of Anbar province west of Baghdad. Prime Minister Haidar al-Abadi, due in Paris next week, has vowed to recapture it within days.

Ramadi’s fall a week ago was followed by the fall of the city of Palmyra in Syria, the two biggest gains by ISIS fighters since a United States-led coalition began targeting them with airstrikes in both Iraq and Syria last year.

“It confirms what we have said all along. There is no military solution without a political solution. In September, we linked the coalition’s support to political commitments by the new Iraqi government, what we call an inclusive policy.

“This contract is what justified our military engagement and I say clearly here that it must be better respected,” Fabius told lawmakers.”

As the jihadis shore up their positions, Abadi, a moderate Shiite leader, faces an important test over whether he can draw Sunni Arabs away from ISIS, a challenge he has struggled to meet despite vows of a more inclusive governance.

He must also show the ability to control powerful Shiite militias tainted by earlier abuses that have stoked Sunni anger toward his government.

The meeting in Paris, where more than 20 foreign ministers, including U.S. Secretary of State John Kerry are due to attend, aims to plot strategy including how to reverse recent losses.