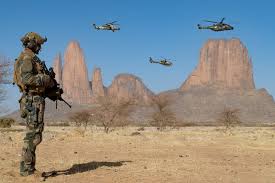 There is something inescapably Beau Geste about France’s Operation Barkhane. Today, as yesterday and as tomorrow, combat patrols from the French Foreign Legion and other regiments of the French Army will set out into the sand and scrub of sub-Saharan Africa searching out jihadists attached to al-Qaeda and Isis, like reported by unherd.com.

France has now been waging war in the no man’s land of the Sahel for six long years. Barkhane began on 1 August 2014, with a mandate for counter-insurgency ops across Burkina Faso, Chad, Mali, Mauritania and Niger — an area the size of Europe. But in the Sahel, the terrorists can run and they can hide. Initially, the French deployment was 4,500 troops — with the Legion heavily committed, as always — but this year President Macron boosted the troop numbers of President Hollande to 5,100. Political Left to political Right, Barkhane is a French commitment. For now.

Ostensibly, the French work alongside the Sahel’s national armies and the peacekeepers of the United Nations’ Minumusa stabilization mission in Mali. For months Paris has been trying to build support in Europe and the West for a multinational special ops “Task Force Takuba”. Only Estonia and the Czech Republic have confirmed allocation of personnel; Britain, meanwhile, contributes a paltry three Chinook helicopters to Barkhane; Denmark two Merlin helicopters; the US declines the invitation to the party, again and again.

Barkhane is France’s show. No one else has the stomach for counter-terrorism in the dust and heat and the vastness of the Sahel, not after Vietnam, Afghanistan and Iraq. The other countries of the West barely report the operation, let alone support it. Barkhane is France’s lonely war.

The financial cost to La Belle France of Barkhane is a breath-sucking 600 million euros per annum. After all, soldiers need to be fed, equipped, and supported by Mirage 2000 jets, Tigre attack helicopters, Reaper drones, and conveyed by 380 trucks and 500 armoured vehicles. The cruel desert is endless.

So is Operation Barkhane, which has become France’s never-ending war.

The insurgency in the Sahel began in Mali in 2012, when a Tuareg separatist uprising was exploited by al-Qaeda-linked extremists who seized cities in the north. With Mali tottering on the brink of collapse France, the former colonial power, began its military intervention, driving the jihadists from the urban centres. This success turned to catastrophe, however, because the militants morphed into mobile formations operating in rural areas, where they proved as easy to kill as the wind. The insurgency spread to central and southern regions of Mali and then into Burkina Faso and Niger.

The jihadists in the Sahel come in 57 varieties, but the majority of their attacks are attributed to Jama’at Nusrat al-Islam wa al-Muslimeen (JNIM), which formed in March 2017 and has sworn allegiance to al-Qaeda leader Ayman al-Zawahiri. Since May 2019, rival Isis has given its imprimatur in the Sahel area to Islamic State West Africa Province (ISWAP), a split from Boko Haram.

Whether umbilically linked to Isis or Al-Qaeda, the jihadists make the sands run with blood. More than 4,000 people were reported killed in jihadist attacks in the Sahel in 2019, and tns of thousands were displaced. The violence vortexes, year on year; recently the U.N, and Secretary-General Antonio Guterres warned that the Sahel insurgency now threatens the countries of West Africa. The central states of Mali are in anarchy.

There is no ambiguity about Operation Barkhane. Paris does not dress it up as “peace-keeping” or “stabilisation”; French officials insist that Barkhane’s priority is counterterrorism and does not baulk at the targeted killing of key jihadist leaders. So far, two of the five founding leaders of JNIM have been “neutralised” (but read “assassinated”). In order to pursue these aims, the French have negotiated a perhaps unprecedented military rite of passage whereby their forces can conduct offensive operations in other sovereign nations. Under this deal UN Security Council resolutions authorise French troops to “use all necessary means.”

According to the press communiques of the Ministère des Armées, there are tactical victories over the jihadists almost every month. Certainly, the pace of operations in the tri-border zone of Mali-Burkina Faso-Niger has increased since Macron doubled down on troop commitment. In January this year, French troops were killing a militant a day in the Liptako-Gourma area of the tri-border; since Barkhane began around 700 jihadists have been captured or killed.

Sometimes, though, the blood flows the wrong way. French operations in the Sahel have led to the death of 43 French military personnel, most recently Tojohasina Razafintsalama of the 1 RHP (1st Regiment de Hussards Parachustistes), killed in Mali on 23 July. Two other “red berets” were wounded in the same suicide attack by a jihadist driving a truck load of explosives. In the obligatory communiqué from the Elysee, President Macron said he “bows with deep respect to the sacrifice of this soldier, who died in the accomplishment of his mission in the service of France”.

And so half-way down the world the French are fighting the War on Terror that the rest of the West has retreated from. There is a terrible innocence to Barkhane. The French commander of Barkhane, General Pascal Facon has declared he can “easily” defeat the Islamists. “We shouldn’t underestimate them,” he said, but “we shouldn’t give them too much importance either.”

This is agonisingly naïve. Seven hundred jihadists may have been taken out of play, but that still leaves about 6,000 terrorists in the Sahel, and they know the lie of the bad lands. The combat patrols of the French rarely do. They drive hundreds of miles from their “temporary advance bases” deep in the desert, bouncing up and down in steel armoured cars and personnel carriers, in temperatures topping 40 degrees, seeing nothing but sand and acacia trees through their wrap-around sunglasses.

For hour after hour. There is looking for a needle in a haystack; then there is looking for jihadists in thousands of square miles of the Sub-Saharan Sahel. The red dust kicked up by the convoys can be seen for miles. The jihadists get prior warning, and melt away with their AK-47s. Just recently, a French combat engineer was interviewed on television following a search for a jihadist weapons cache, ending with the inevitable reply “the search didn’t find anything today”. It has become the mantra of French officers interviewed about Barkhane — “We didn’t find anything”. They smile for the camera, but you can sense the frustration.

The jihadists find the patrols, however. The threat of ambush, in the desert and in the villages, is ever present. The jihadists may wear flip-flops but they mount viciously effective military operations, taking out the armoured personnel carriers with rockets; in January they attacked a static army base at Chinagodrar in western Niger, killing 89 soldiers and staff.

The Islamists can afford to spend lives and they can afford to spend money, being more than amply funded by crime. According to the Institute for Security Studies, these activities “mainly take the form of trafficking in weapons, drugs, motorcycles and fuel, along with cattle rustling, artisanal gold mining and poaching”.

Neither should it be supposed that the militants lack popular support. The national governments of the “Group of Five for the Sahel” — Chad, Burkina Faso, Chad, Mali, Mauritania and Niger — are blighted by corruption and incompetence, and some in the villages think “Better the Islamist devil you don’t know very well than the governmental one you definitely do.” Unsurprisingly, the Islamists also frame Operation Barkhane as Imperialism Redux, so that the French are in danger of handing the Islamists the most dangerous weapon of all, the propaganda narrative of A War of Independence.

In terms of military evolution, France is where America was in 2001 with Afghanistan. No exit strategy, no plan other than fighting war with war. Meanwhile, the armies of the “G5 Sahel”’, supposedly supportive of Barkhane, are under-trained and under-equipped. On one training exercise, the French instructor discovered that his Malian army students had no idea what a compass was.

Barkhane, and its lack of effectiveness in bringing resolution, is starting to take its toll. Anti-French demonstrations in Bamako, the Malian capital, were regular fixtures before Covid, with Macron depicted as Hitler on placards.

Still, there is something distinctly, forlornly heroic about the operation. The French have a dislike of Islamism that is visceral, reflexive. The French are also psychologically comfortable in playing soldier in the Sahel. Last year in a bar in Saint-Maixent, where the French army has its NCO training base, I asked a corporal what was the purpose of Barkhane? He replied with a one-word answer “Bataclan.” His mate nodded over his glass of 1664 lager.

The theory is that, by fighting the jihadists in the Sahel-Saharan strip (“SSS” in military jargon), they will be unable to mount terror attacks in France like that of 13 November, 2015. Maybe, but only a fool would discount from France’s war ambitions the stopping of the flow of migrants to Europe caused by Malian instability, and protection of French uranium sources in the region. The French have admirably lofty philosophies, but they understand realpolitik.

Only a fool, too, would disavow the imperial murmurs that still occur in the heart of France. Macron may come over all Monsieur Union européenne, but France has an unrequited longing for its colonial past. You only have to watch the weather report on France 2 TV to see that; after giving the meteo for The Hexagon it proceeds to give the forecast for “France d’outre-mer”, the lingering imperial outposts, as far away as New Caledonia in the South Pacific. Or indeed, watch the annual Bastille Day display of military might parading down the Champs-Elysées.

In the vastness of the Sahel France gets to play out colonial memories as neo- imperial dreams. But this is the tragedy of Barkhane, that France most ambitious military effort since Algeria is turning into a nightmare, her own personal Afghanistan.