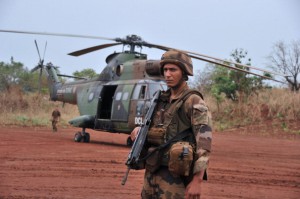 The Government of France on Wednesday described the operations of Boko Haram, an Islamic terrorist organisation, as a real threat not only to Nigeria, but also Africa at large, noting that it would work with Nigeria to crush the group.

Despite the increasing spate of Boko Haram onslaughts mainly in the North-east and Chad, the French government disclosed that more than 50 big French companies had established offices in Lagos, saying more “are still coming.”

However, the ambassador decried the deadly operations of Boko Haram, which he said, had become “a real threat not only to Nigeria, but equally for to her neighbouring countries in West Africa in particular and Africa in general.”

He therefore said it became mandatory “to work with the whole region. That was why President Francois Hollande conveyed a meeting in Paris with former President Goodluck Jonathan and presidents of surrounding francophone countries in May 2014 to help them to cooperate and work together against Boko Haram.”

He added that the French Government “is working very closely with the Nigeria military forces. We are providing them intelligence and military support. We are also supporting very strongly Nigeria’s neighbouring countries.

“We are encouraging them to cooperate with Nigeria. This led to the establishment of Multinational Joint Taskforce which was established in Ndjamena, but with a Nigerian General as its head. That is why our relations are now expanding very strongly. But we have to relate more economically. That is why I often come to Lagos.”

In spite of potent threat the Boko Haram onslaught posed to foreign investments, the ambassador said the French Government would maintain stronger economic presence in Nigeria, especially Lagos being the country’s economic capital.

He acknowledged that the greatest part of French community in Nigeria “is Lagos and not in Abuja, especially our companies are all present here in Lagos. We have more than 50 offices of big French companies all established here in Lagos and more are coming.

In a response, Ambode told the French envoy that Lagos “is expanding its frontiers to accommodate investors willing to set up their businesses in the state and that my administration will ensure that their investments are secured.”

The governor explained that the state government “is putting finishing touches to policies and strategies that will strengthen its economic ties with neighbouring French speaking countries within the West African region.”

He said: “I know that Lagos is also a major commerce city and we have not done enough to attract bilateral trade and relationship with most of the French speaking countries. So it gladdens my heart that the Ambassador is here today.

I am excited that Tafoo is planning to set up malls in Lagos as quickly as possible. Societe General Bank is coming back and also majority of the French companies are trying to ensure that they have a place in Lagos”, Ambode explained.

The governor therefore assured that foreign investors coming into the state that the government would create an enabling environment for their businesses to thrive, noting that opportunities abound in the area of public transportation and security.