Macron has demanded Iran’s ballistic missile programme us placed under international surveillance as the French president looks to take a tougher stance on Tehran, like reported by express.co.uk 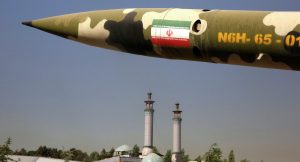 Macron said the use of “Iranian-linked missiles in Yemen and Syria” needed to be addressed.

His call comes as the Iran nuclear deal is precariously poised following Donald Trump’s threats to scrap the agreement.

The French leader said Paris, one of the signatories of the 2015 deal, wants to preserve the accord because nothing better has been tabled.

He said the international community needs “to put Iran under surveillance over its ballistic missiles”.

The French president said: “It’s indispensable for the security of the region and so we need a mechanism of sanctions and control adapted to that.”

Last month Donald Trump warned he will pull the deal – which regulates the way Tehran produces nuclear power – if the European countries involved don’t fix issues within the agreement.

The US president said: “Fix the deals disastrous flaws, or the United States will withdraw.”

Trump’s eleventh hour warning came after he agreed to waive key sanctions the US lifted as part of the deal.

The waiver must be issued every 120 days to keep the sanctions, which the US president thinks are too lenient, from kicking back in.

He said: “I am waiving the application of certain nuclear sanctions, but only in order to secure our European allies’ agreement to fix the terrible flaws of the Iran nuclear deal. This is a last chance.

“In the absence of such an agreement, the United States will not again waive sanctions in order to stay in the Iran nuclear deal.

“And if at any time I judge that such an agreement is not within reach, I will withdraw from the deal immediately.”

A day later, Mr Macron pressed the importance of maintaining the accord in a conversation with Israeli prime minister Benjamin Netanyahu.

The Elysee Palace said in a statement: “The president spoke of the importance of preserving the Iran nuclear deal, and the necessity for all parties to the agreement to respect the commitments they made.”