You are here: Home / Europe / France wants Europe to do more to fight Islamic State 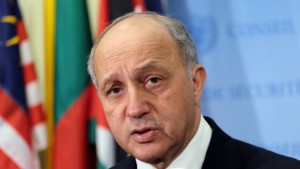 France’s foreign minister wants European countries to do more to fight the Islamic State group, and is seeking support from Russia in international talks about defeating the group.

France, which joined U.S.-led airstrikes against Islamic State extremists in Iraq, is hosting a conference Tuesday on the international efforts against IS.

Foreign Minister Laurent Fabius said on France-Inter radio Thursday that European countries “aren’t doing many things” against the group, even as hundreds of European extremists have joined IS fighters.

He also said France is including Russia in the anti-IS discussions.

Fabius criticized the Iraqi government for “ostracizing” Sunni communities who could help fight IS. Doubts have grown recently about whether the Shiite-dominated Iraqi government can overcome the sectarian divisions.